Can Elderly with Broken Hip Recover without Physical Therapy? 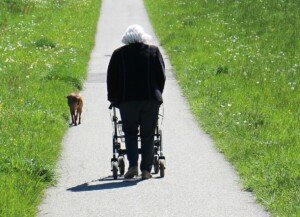 What if an elderly person refuses to do the prescribed physical therapy following replacement for a hip fracture?

Are they doomed to spending the rest of their life hobbling along in a walker or sitting in a scooter?

When my mother was 89 she fell at a store and broke her hip. This required a total hip replacement.

Prior to the surgery she was not what you’d call solidly stable with her unassisted walking. She walked slowly and was prone to what we called a collapsing leg, but she wouldn’t actually fall.

The leg would just suddenly fold and put her off balance, but she’d recover.

In the store, she reported that a sudden attack of sciatica pain (which was probably why the leg often collapsed) took her off balance and she fell to the hard floor, fracturing her hip.

The surgeon said that there was a “slim chance” that once she fully recovered from the surgery and went through all the physical therapy, that she’d be able to walk without a cane.

What if an elderly person refuses physical therapy?

My mother initially had physical therapy in a skilled nursing facility for a week, but the PT was worthless.

I witnessed it and they didn’t have her doing much. The rest of the time she spent mostly in bed. The facility was shameful for allowing such inactivity.

At home my elderly mother was supposed to have a physical therapy from a visiting PT specialist, but was not consistent, did not try very hard, and soon cancelled the sessions.

She would not do physical therapy under my guidance either. Two months post-surgery, she was walking without a cane, but needed it.

Her gait was bent over and very unsteady, and it was scary whenever she walked because we thought she was going to fall.

Amazingly she never did.

Over time she regained a normal gait pattern and was walking fine, save for lack of stamina.

So here’s a case of an elderly person who really didn’t have true physical therapy yet recovered fully as far as regaining a functional walk.

Eventually I got her to agree to let me give her twice weekly and then weekly PT sessions which dramatically increased her lower body strength and balance.

My elderly mother’s case reminded me of a story I heard from my parents about a woman who had a total hip replacement due to a fracture.

Physical therapy for a hip replacement—especially if it involved a broken bone, however, should always be undertaken, especially if the patient is elderly.

We had no crystal ball that would have predicted my mother somehow, someway, re-acquiring her pre-fracture walking.