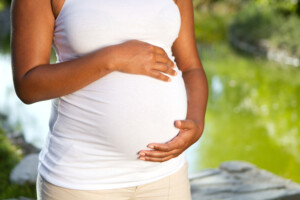 The high blood sugar of type 1 diabetes doesn’t interfere with GETTING pregnant, but instead causes another problem once a woman IS pregnant.

Many women with type 1 diabetes are struggling to have a normal pregnancy, and they believe that type 1 diabetes—an autoimmune disorder—makes it tough to get pregnant.

In type 1 diabetes, the pancreas does not produce insulin. This hormone is necessary for transporting blood sugar (glucose) to the muscle cells as their source of fuel.

Since there’s no insulin to do this job, the glucose level can get dangerously high.

Exercise won’t bring it down because, again, the shuttle bus is missing: insulin.

What Happens in Pregnancy

“Higher than normal blood sugar readings do not prevent conception, but rather, impact the ability of the embryo to implant in the uterus, leading to a miscarriage in the first week of pregnancy,” explains Jenepher Piper, a family practice nurse practitioner for Maryland Family Care for 25+ years and a former nurse with Home Care Nurse for Johns Hopkins Home Care.

Piper continues, “According to statistics released by the American Diabetes Association, patients with elevated blood glucose levels have a 30-60 percent increased chance of miscarriage compared to those with normal blood glucose.

“Because type 1 diabetics are usually thin due to fat and muscle wasting, there is little effect on sex hormone levels (estrogen and progesterone) as one might expect with conditions associated with type 2 diabetes like insulin resistance and polycystic ovarian syndrome.”

Type 1 diabetes is not associated with or caused by any known lifestyle factors.

However, the type 2 version—which is a metabolic disorder—is strongly linked to being overweight, eating a lot of processed foods and the absence of an exercise regimen.

In either case, getting pregnant isn’t the issue; it’s carrying the baby to term.

Diabetics, either type 1 or 2, need to take glucose readings throughout the day to always stay ahead of the curve.

Patients suffering from conditions such as coronary artery disease, obesity and diabetes turn to Nurse Practitioner Piper to help them best manage their overall health.