Is 60 Minutes of Cardio Exercise Too Much at Once? 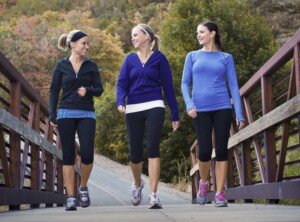 First of all, it depends on if the one hour of cardio exercise is done three times per week versus every day.

So let’s just start with several times a week.

One hour of cardio is not too much if it’s done on non-weight-lifting days, and especially if it includes a warm-up and warm-down.

Sixty minutes of challenging aerobics IS too much if it’s done preceding or following a strength training workout.

However, physique and bodybuilding competitors, beginning about two weeks before a contest, will do an hour (or more) of moderate cardio the same day they lift weights, though usually, the aerobics will be done apart from the weights.

Some fitness professionals believe that an hour of HIIT cardio is way too much, even if done only twice a week, because after 40 minutes of HIIT, fat-burning hormones (produced by HIIT) cease to oppose the stress hormone that HIIT also produces.

Buildup of this stress hormone will then interfere with fat loss efforts.

Personally, I have never had this problem when doing HIIT for longer than 40 minutes; I’ve done it for a sixty minutes outdoors in the hills and never saw an impediment to my body fat percentage.

Aerobics done at a casual pace for sixty minutes, following weightlifting, is not too much.

But when people ask, “Is one hour of cardio too much?” I take this to mean an actual cardiorespiratory workout, rather than just mere time spent strolling around a track like an automaton or pedaling like a zombie on the bike and not even sweating.

Bottom line: In and of itself, an hour of aerobic exercise is not too much, as an isolated workout.

Your ancient ancestors did sixty minutes or more of sustained cardio many days of the week.

Sixty minutes of cardio on a daily basis is a different ball game. This isn’t excessive if this is all a person does, or if their weight lifting is mild and especially if it’s of short duration, versus moderate or intense weight lifting.

An hour of cardio every day may also be in order for certain kinds of competitive athletes, and people who, due to injury, must substantially curtail their strength training.

An hour of cardio is not too much for someone who spends most of the day in a chair and hardly lifts weights.