Is Excessive Napping in the Elderly Healthy and Necessary ? 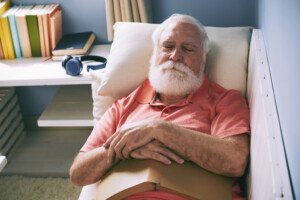 You don’t get a pass on the dangers of excessive sleep & napping just because you’re elderly.

Some older people will make excuses for all of their naps and will insist they “need it,” but being elderly does not make one immune to the hazards of excessive inertia.

First of all, there are medical conditions that cause excessive drowsiness and a desire to nap a lot, such as:

This article is about elderly people who seem healthy and are quite functional, but they take lengthy naps daily, sometimes twice a day – after sleeping overnight for at least eight hours, sometimes 10 hours.

These particular elderly people have the following traits:

As for that last point, the evidence of sound sleep during the nap is snoring, a mouth that’s hanging wide open, and/or not responding to sudden loud noises (e.g., glass falling on floor), the doorbell, phone, and of course, calling their name several times is necessary to arouse them.

We also have to be sure to differentiate between napping in a recliner (falling asleep) due to drowsiness or induced drowsiness from TRYING to fall asleep due to boredom …. and lying immobile in the recliner, wide awake, but with whole-body fatigue from a medical condition or age related lethargy.

Dangers of Excessive Sleep: Don’t They Apply to the Elderly?

We keep hearing about study after study showing the dangers of excessive sleep. These studies typically refer to excessive sleep as that which occurs overnight.

For example, a study by Liu et al in the journal SLEEP says that sleeping over 10 hours is linked to heart disease in people over 45.

The hazards of excessive sleep per 24 hour cycle do not exempt the elderly.

Are there any solutions?

For the type of elderly person described above, who’s still cognitively intact and highly functional, a pursuit of a new hobby will discourage excessive napping.

A person can watch only so much TV, peruse so much online news and read so much Kindle before getting really bored if there’s no other stimulation.

Mobility impairments, back and/or knee pain do indeed encourage wanting to spend excessive time in one’s favorite recliner, which then in turn can easily induce enough sleepiness to fall into deep slumber.

“Sleepiness that occurs abruptly in the elderly needs to be investigated,” says Kathryn Boling, MD, a board certified family medicine practitioner with Mercy Medical Center in Baltimore, MD.

“In fact, urinary tract infection in the elderly typically manifests as an abrupt change in mental alertness.

“Increased sleeping that occurs subtly over time, especially in the very elderly – over age 80 years — or is accompanied by memory changes associated with aging and/or Alzheimer’s, may be normal.”

But the dangerous conditions that excessive inertia cause do not care if the person is over age 65.

The harm of all that inertia applies just as much to the elderly as it does to middle agers.

Dr. Boling diagnoses and treats a wide range of conditions from acute illnesses to chronic diseases such as diabetes and hypertension.