Why You Should Drink Lemonade in the Winter 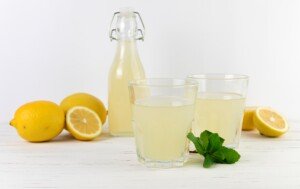 If you avoid lemonade only in wintertime, ask yourself what the logic for this is.

Advertising? You drink other cold juices in winter, right? Why not lemonade?

Many people will not drink lemonade during the winter season, but will enjoy it during the summer.

This is one of the most absurd things out there. It may seem like a petty thing to write about, but this seemingly petty issue is indicative of a bigger problem:

Easily being influenced by marketing – even when the marketing lacks logic.

All the lemonade commercials air in the summertime. Supermarkets put out their lemonade displays at the front of the store – only in the summer months.

Raise your hand if, when you were a child, your mother bought lemonade only in the summertime.

Raise your hand if your mother bought other cold beverages during the winter such as frozen concentrate orange and grape juice!

Juice is juice, as far as its chilled effect on the body.

So why is there this avoidance of lemonade during the winter?

Drinking lemonade in the winter does not freeze the body any more than does drinking orange juice or grape juice.

If it’s 9 degrees outside, what does this have to do with drinking lemonade INDOORS where a heater has the room temperature at 74 degrees?

If it’s July and 92 degrees outside, it’ll probably still be 74 degrees inside – from air conditioning.

Yet many people think it’s foolish to enjoy lemonade indoors where it’s 70-something degrees just because outside there’s five feet of snow.

“Lemons have abundant amounts of vitamin C which is a great antioxidant,” says Prajakta Apte, RDN, owner and founder of Right Nutrition Works who helps people create a healthier lifestyle.

“Antioxidants strengthen your body’s ability to fight against common colds. Some people may experience slow/sluggish digestion during winter due to cold temperatures. Vitamin C is an essential vitamin that helps with digestion.”

Jeez, if you’re thirsty and love lemonade, then drink it; never mind the weather outside!

Another reason people associate lemonade only with summer consumption is because summertime is when kids set up their lemonade stands.

I remember years ago asking for lemonade at a restaurant (it was listed on the menu). It was wintertime.

Guess what: I was told, “We don’t serve lemonade in the winter.”

I point-blank asked why.

Instead of getting a logical, intelligent explanation, I instead got: “Because we just don’t.”

• As Apte pointed out, it’s a good source of vitamin C, which provides a myriad of health benefits.

• Low in calories when sweetened with Stevia.

• Also contains B vitamins and important minerals like magnesium.

• Though acidic in taste, lemons are alkaline-forming in the body, which helps with the body’s pH balance.

Stop allowing yourself to be brainwashed by marketing and by what other people think (“Hey dude, you drink lemonade in the WINTER?”).

Prajakta Apte is the author of the eBook “Overcoming Nutrition Roadblocks.” Her personalized approach to nutrition therapies helps treat root causes of conditions such as type 2 diabetes, high cholesterol, GI disorders, hypertension and many more.