Can Menopause Cause Armpit Odor to Change & Get Really Bad ? 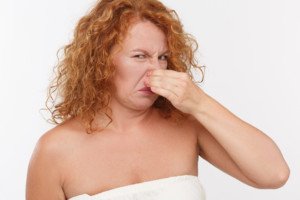 We’re not talking about a change in armpit odor strength from increased menopausal perspiration, but an actual change in the odor itself – a really stinky pungent scent.

Have you experienced the following?

• You’re in menopause or have completed it.

• You’ve had hot flashes all along—prior to the beginning of menopause, during and afterward.

• The hot flashes have intensified and you can get pretty doggone sweaty at times.

• And somewhere along the way you’ve begun noticing a DIFFERENT odor to your underarms. And it’s bad.

• This change in odor under your arms correlates to perspiration: The heavier you perspire (whether it’s from a hot flash or exercising), the stronger this new, different odor becomes.

• It’s nothing like the “usual” armpit odor you’ve always been familiar with and that you’ve certainly detected on other sweaty people.

• You may even describe this changed armpit stink as pungent. It’s very strong and unpleasant, unfamiliar to you – and you’re unnerved about it.

• You may even begin wondering if this isn’t related to menopause and instead might be a sign of some kind of cancer.

“In theory, sweating and body odor is in part related to release of certain hormones called androgens,” says Lindsay Appel, MD, an OB-GYN with the Family Childbirth & Children’s Center at Mercy Medical Center in Baltimore.

“Androgen production does change after menopause (it usually decreases), so any changes in body odor could be related to a decrease in androgen hormones in the body,” says Dr. Appel.

I’ve scoured the Internet for an answer to the title question, and all I’ve come up with is how an increase in perspiration, due to menopausal hot flashes, will cause an increase in odor or a more noticeable odor.

But this isn’t about a stronger version of the underarm odor you’ve always been familiar with or an increase in frequency of that smell.

It’s about a different, new smell, a changed odor—a new kid on the block.

And it doesn’t always come with hot flashes—but sweating from exercise brings it out.

Don’t worry, it will eventually subside as your body readjusts to the changes of menopause.

And even though the stink occurs during sweaty exercise, this new, malodorous smell is still most likely being generated from the hormonal changes of menopause.

Maybe you’ve read somewhere that liver cancer can cause a body odor and are now freaking out that you have liver cancer.

Yes, liver cancer can cause a new odor about the body.

But in the meantime, don’t sweat the menopausal stink of your armpits. Just be sure to clean them daily with soap and use an effective deodorant.