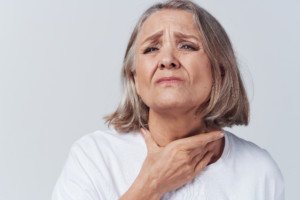 Laryngeal cancer is one of the scariest diseases, but it would be appealing to someone who’s just been diagnosed with bulbar onset ALS.

Symptoms overlap in these two conditions.

“Both conditions can be associated with hoarseness,” says Bonnie Gerecke, MD, director of the Neurology Center at Mercy in Baltimore with a special interest in neuromuscular disorders, ALS and EMG.

So if you’ve had an unexplained, persistent hoarse voice lately … and no other symptoms with it … it’s understandable how you can be in a state of panic.

“There are many different bulbar onset symptoms,” says Dr. Gerecke.

“These include the following: dysarthria (slurred speech), dysphagia (trouble swallowing), trouble chewing, drooling, moving the tongue in the mouth and hoarseness.”

Difficulty speaking (dysphonia) is also a symptom, and this may occur without slurring. The tongue will also shrink due to eventual atrophy.

And of course, there’s the tongue fasciculations, but these are not the same “twitches,” tremoring or quivering that a healthy person sees when they stick out their tongue and inspect it.

It’s impossible to keep the tongue perfectly still when inspecting it, especially if you’re scared of what you’ll see.

The tongue is not designed for meticulous control of movement. It’s not like a finger that you can hold perfectly still.

The tongue twitches of bulbar onset ALS are undulating and wormlike.

Dr. Gerecke says, “In contrast to bulbar symptoms due to ALS, patients with laryngeal cancer often experience pain when swallowing. They may also experience sore throat, a lump in the neck and cough.”

Bulbar Onset Symptoms that Laryngeal Cancer Will Never Cause

• Trouble chewing, a feeling of weakness when doing so

• Difficulty moving the tongue within the mouth

• There may be lip involvement very early on, affecting swallowing.

• Saliva control when eating. There is excess saliva regardless of eating as the ALS progresses.

Laryngeal Cancer Symptoms that Bulbar Onset ALS will Never Cause

• Pain when swallowing, though there is no mechanical difficulty.

• Lump in the neck

• Hoarse voice, though not all laryngeal cancers cause this.

• Trouble breathing (ALS causes this via a vocal cord spasm)

Benign conditions such as LPR can cause some of the symptoms listed here.

Laryngeal cancer is a very uncommon disease, and bulbar onset ALS affects about one in 300,000 people.

Dr. Gerecke has a special interest in ALS, myasthenia gravis, myopathy/muscular dystrophy, peripheral neuropathy and radiculopathy. She is board certified in general neurology and neuromuscular medicine.