Several New Moles at Once: Will this Keep Happening in Older Person? 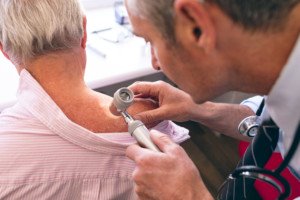 If a middle age person suddenly gets several new moles, does this mean they’ll continue getting new moles for the rest of their life and thus have to worry about melanoma?

It’s more common for kids than middle age adults to notice the development of several new moles that seem to have popped up at the same time.

Growth of new moles continues throughout a person’s life. There is no abrupt cut-off age.

However, with each decade after age 30, the likelihood of new moles developing, especially several at the same time, drops.

What percent this drops with each decade is not known. But even senior aged people can acquire new, and benign, moles.

A new mole in an older person is more likely to develop into melanoma when compared to a new mole in a child or young adult.

This doesn’t mean that several new normal-looking moles in middle age or older equates to the same level of alarm as if that person were to start passing bloody stools.

Does the growth of several new moles at the same time mean that a new trend has been established for the rest of the person’s life?

“This question really can’t be answered,” says Dr. Jennifer Gordon, who is board certified by the American Board of Dermatology; she practices at Westlake Dermatology located in Austin, Texas.

“Genetics plays a large role in nevi [moles] development but so does environment. There are also many medical factors that can play a role (hormones, for instance).

“There are certain people who develop many nevi and will continue to develop nevi throughout their life (likely still slowing down after age 30).

“There is also something called dysplastic nevus syndrome, where patients make many atypical nevi.

“Either one of your options is a possibility, and although there may be some predictors, there is nothing consistent enough to be able to tell a patient whether they will continue to develop moles or not.”