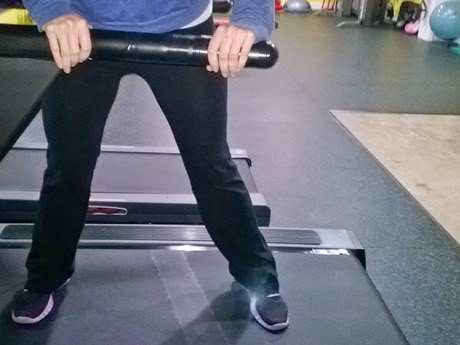 If you hold on while walking sideways on a treadmill, you totally defeat the purpose. An able-bodied person has no excuse for this.

Every single person I’ve ever seen holding on while walking sideways on a treadmill appeared to be under the age of 40; most appear to be in their 20s.

So the excuses of, “Well, she’s not as young as she used to be,”, or, “I’m sure if he was younger he wouldn’t be holding on,” absolutely do not apply here.

To assume that every time I’ve seen someone holding on while walking sideways on a treadmill was their very first time, is also illogical.

Over the years the total number of people I’ve seen doing this has added up. What are the odds that for every one of them, or even 50 percent of them, it was their first crack at it?

The speed is always slow, too, so I don’t understand why only a few people, out of all the people I’ve seen doing this over the years, actually had their hands OFF the rails. The typical speed appears to be between one and two mph.

Two mph forces a slight trot, though it can still be walked. The difference between one and two mph is notable when moving sideways.

The first time I walked sideways on a treadmill, I did not hold on. However, I set the speed to one mph, because it was something I’d never done before.

Ask yourself why you walk sideways on a treadmill. Then ask yourself if keeping your hands on the rails will interfere with what you want to accomplish. Watch other people do this (though it’s quite uncommon).

Ask yourself if they have good posture while holding on. I will answer for you: NO. NEVER.

Holding on while walking or trotting sideways results in skewered posture.

• It counteracts the potential for improving balance and proprioception—assuming that these are your goals.

• It creates a false sense of achievement. You may think your coordination is improving as you move sideways, but as long as your hands are on the rail, the signals in your body that recruit its balancing mechanism get interrupted.

Walking sideways will not burn extra calories, so I’m going to safely assume that the reason people who do this has nothing to do with burning fat.

If they’re doing this to enhance athletic skill (maybe they play pickup basketball or are in a volleyball league), it won’t happen.

When you play your sport (maybe it’s tennis?), are you holding onto anything for support? Hmmm…what an interesting question!

Just how is walking or trotting sideways on a treadmill with your hands on the rail for balance supposed to improve your balance when you’re on the court?

Or anywhere in life, for that matter, such as hiking, playing in a park with your kids, etc.?

Benefits of Hands-Free Sideways Walking on a Treadmill

• Improves coordination and balance; has carry-over to a real-life situation where you need to balance laterally.

• Provides a new challenge to your spine and core; enhances their efficacy.

• Adds a new challenge to the soft tissue structures of the knees; strengthens knees.

• Same with the feet; strengthens the ankles.

• Also improves the conditioning of the muscles that control side leg movement. This includes the hip abductors.

These benefits are not in place when you hold on. You’re probably thinking, “Well, if I let go I’ll lose my balance!”

How to Correctly Walk Sideways on Treadmill Without Holding On