How Much Weight Must a Woman Lift to Look Like a Man? 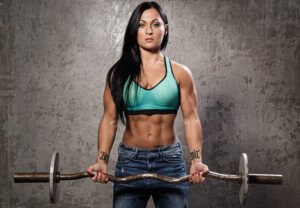 How many pounds must a woman lift before it starts making her look like a man?

Are you a woman wondering at what point your strength training will begin making you look like a man?

I was a personal trainer some years ago at a gym, and for years I also had an editorial business for which I often proofread litigation transcripts.

In one such recent transcript, the plaintiff said that she lifted weights. The attorney asked how much she could bench press. She said 15 pounds.

The attorney asked her how much she could lift for a few other exercises, and the amounts were exceedingly light. The woman then said, “I don’t want to look like a man.”

Fat chance you’ll look like a man if you lift weights!

I will tell you right now, ladies, that if you were able to bench press 200 pounds, you STILL probably wouldn’t look like a man.

So we have a woman who doesn’t want her bench press to get much higher than 15 pounds because she believes heavier lifting will make her look masculine.

However, even the most effeminate-looking man can bench a lot more than 15 pounds; unless he has a serious joint disorder, a man who isn’t built in a masculine way, or who’s scrawny and “has no muscle,” should easily be able to put up 65 pounds for reps.

The body will not develop big muscles unless there’s a need to.

When a woman begins creating a need to have big muscles, her muscles will really start growing, and growing.

If a woman can bench press 250 pounds, this does not mean she’ll look like a man who can lift this same amount of weight.

A man and woman may very well be able to lift the same amount of weight (e.g., 185 pound bench press, 275 pound deadlift, 225 pound squat), yet have totally different physiques.

In fact, it may appear that he could easily overpower her, because she will likely look just as “feminine” as the next woman, though her build may be sculpted or if she’s a bit overweight, look like “there’s muscles under there.” 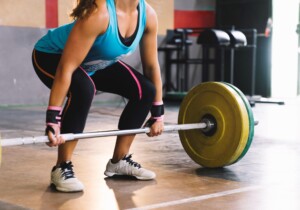 Female competitive bodybuilders on the professional circuit, who ripple with unbelievable muscles, aren’t as strong as they look, though they are very strong.

The sport of bodybuilding is about appearance, but the sport of powerlifting is about how much you can lift for one repetition; thus, the emphasis is on strength, not muscle size or physique. This is why some powerlifters have excess body fat.

This is why female powerlifters who can move outrageous amounts of weight often appear incapable of lifting even half the amount.

This is always true in the lower body weight divisions of accomplished competitors.

Nevertheless, the general rule is: Strength is size — most of the time — depending on the sport.

A woman cannot get “big muscles” by lifting light or medium weights, or sometimes even heavy weights, depending on how “heavy” they are; “heavy” is open to interpretation.

How heavy is heavy enough to get big? It’s a lot more than you may ever be capable of doing.

I encourage women to lift hard and heavy; warm up first and make sure your form is spot-on.

The odds of you “turning into a man” will never happen without the assistance of anabolic steroids and a lot of eating, not to mention genetics.

The woman in the above image is an extreme exception; it takes tremendous time and dedication to get her look.