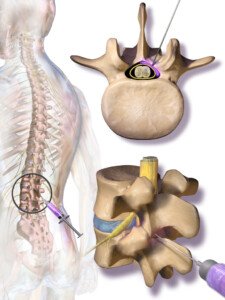 This article is about how soon in an elderly patient an epidural steroid injection may take to work.

An epidural steroid injection is a common treatment for a lumbar herniated disc, says spine-health.com.

My mother is elderly and was diagnosed with a low back herniated disc not too long ago (L5-S1).

After she had received the epidural steroid injection, I asked the doctor, “How long does this usually take to start working?”

He said that the time it takes for an epidural steroid shot to start working varies from patient to patient, and in some patients, it may start working very soon, while in others it may take “up to a few weeks.”

He didn’t make any distinction, however, in terms of elderly age vs. younger age in a patient.

It’s also important to note that a herniated disc is not necessarily an “old person’s disease.”

My elderly mother was in more pain after the epidural steroid injection than she was prior to the procedure.

The doctor explained that this was because of the compressing effect of the drug in such a narrow space, that it was a matter of “volume.”

The amount of room for the medication was tight, limited, and so the drug was literally pressing against the tissue. This, he said, was temporary.

My mother had walked into the procedure room without assistance, yet had to be wheeled out, all the way to the car where I was waiting.

In addition to pain from the medication filling up a limited amount of space in her spinal column, there was also some soreness from the actual injection. All day long my mother convalesced.

The next morning, the sciatica pain was gone. She was walking around as though nothing had ever been wrong, and reported that the only issue was soreness in her buttocks at the site of the injection.

So in my elderly mother’s case, an epidural steroid injection for a herniated disc took less than 24 hours to begin working.