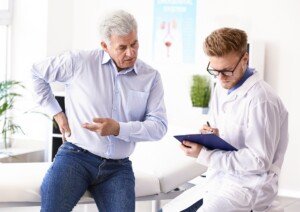 Perhaps you’ve had an epidural steroid injection for a herniated disc which solved the sciatica pain, but now you have a new kind of discomfort.

Have you recently had an epidural steroid injection to relieve the pain of a herniated disc (lumbar), and even though the shot worked for the original discomfort, you now have a new kind of pain?

This happened to my mother. The doctor said that the new “soreness,” as my mother initially described it as, was the result of the injection itself and that it would be temporary.

The original pain of her herniated disc was in her buttocks and the back of her upper leg (sciatic nerve).

After the epidural steroid injection, my mother reported that the sciatica problem was gone, but there was a new pain that had not been there prior to the procedure. The “soreness” didn’t seem to be going away as days went on, either.

It was bad enough to dampen her spirits, take painkillers and use cold packs. For almost two weeks this new pain persisted, and finally, my mother was prescribed gabapentin, also known as Neurontin, a drug for nerve pain.

However, her primary care doctor, as well as the doctor who had performed the epidural steroid injection, did not diagnose this new discomfort as being related to the sciatic or any other nerve.

The day of the epidural steroid injection, the doctor did mention that there’d be post-procedural discomfort caused by the volume of the injected medication within the confined space of my mother’s spinal canal.

As the medication “finds its way around,” explained the doctor, it would produce pain, and this would be normal, he added.

Well, how long was it supposed to take for the drug to find its way around and work its way through the region?

My mother was at first reluctant to try the Neurontin after finding out what the potential side effects were.

On the other hand, every medication she’s ever been prescribed had a litany of potential side effects that were unnerving to read through.

Several days after getting the prescription, she decided to try the Neurontin, and it worked like a charm; the new pain vanished and she’s back to normal.