How Personal Trainers Can Stop Clients from Talking So Much 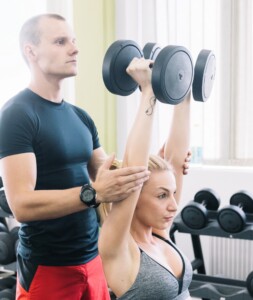 If you’re a personal trainer, you probably have a client who talks too much during sessions.

Or, perhaps as a personal trainer, you haven’t had this problem, but are surely anticipating that sooner or later, you’ll get a client who keeps talking throughout the workout sessions.

When I was a personal trainer I had a few clients like this; they were motor mouths.

As a personal trainer, you may feel “afraid” to point out to the client that he or she talks too much – afraid of losing their business. This is an unfounded assumption.

Realize that if a client feels comfortable enough with you to talk nonstop during workout sessions, this client must really like you, and wouldn’t want to hire another personal trainer.

Make sure that the client knows that there are time limits in between routines.

These time limits may be based on the clock, or how recovered the client appears to be.

Make sure they know this right from the get-go. This way, if the client ends up being a nonstop talker during sessions, he or she won’t be in for a shock when you remind them that the rest time between sets is up.

I would allow my clients to do their talking in between sets. But when it was time to do another set, I’d raise a finger and say, “Hold that thought; time for another set.” They had no problem with this procedure.

But if your client continues talking during the routine, then this means you’re not working them hard enough.

Often, my clients were unable to talk while performing their exercises because the intensity was too high.

When a personal trainer has a nonstop talking client, this reflects inadequate assignments on the trainer’s part.

The client is paying you to get a good, rigorous workout. They should not be able to yak while exercising, with the exception of warmup routines or stretching. That’s fine.

But when it’s time for the routines that count, the intensity and protocol should be set high enough to make talking impossible.

This doesn’t mean that the personal trainer should make his poorly conditioned, 55-year-old client perform risky stunts or heart-pounding, bone-jarring action just to keep them quiet.

It means assigning routines that require focus and concentration, and just because an exercise is difficult, doesn’t mean it’s bone-jarring or might give them a heart attack.

An example would be leg lifts in the Roman chair. These are quite benign on the heart and bones, yet when a poorly conditioned client attempts these, it’s very unlikely that he or she will attempt to carry on conversation.

The same can be said for an intense set of seated chest presses: friendly to the heart and bones, but not to the ability to talk away.

Explain to new clients before their first personal training session your protocol when it comes to talking.

Lay it out for them to make sure they understand that talking is not permitted during routines other than easy warm-ups, unless they want to provide feedback about how their body feels during the exercise (and the personal trainer should encourage this, actually), or unless they have a question relating to technique.