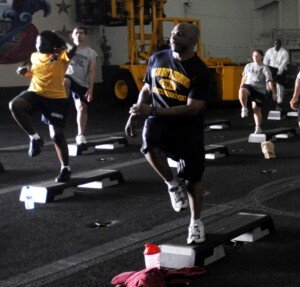 Are you a man who’d like to take a step aerobics class but feel rather “intimidated” that all the women will be stepping circles around you?

Here’s how to overcome that skittish feeling.

Doesn’t matter what time of day, or what day of the week—men just don’t want to take part in step aerobics classes—save for the very small minority who don’t feel awkward or intimidated.

Now we really can’t believe that most of the men who wouldn’t be caught dead in these group fitness classes don’t think that stepping drills are an effective cardio workout.

Certainly they realize that the variety of stepping movements create a sensational workout, especially when you add height to the platform.

So why aren’t more men in step aerobics classes?

I’m going to guess that a large number of them think they’ll fumble and stumble on some of the moves, or that they won’t be able to coordinate or remember a sequence of moves.

Another possible reason is that they don’t think they’ll be able to keep up, due to either lack of coordination or lack of aerobic fitness.

And perhaps another reason is that they believe that participating in a step class will take their macho image down a few notches.

How Men Can Overcome Intimidation of a Step Aerobics Class

Realize that you don’t have to do everything that the instructor tells you to do. If you’re uncomfortable pivoting, for instance, then just do the “basic step” instead.

If the “knee step” has you feeling a little dizzy, again, do the basic step.

If you can’t keep up from an aerobic standpoint, march in place until you get recharged, but I suggest starting out with one riser for your first class if you’re not confident in your cardio fitness.

Set your platform up at the back of the class; you’ll hardly be noticed.

Remember that there are always other participants who aren’t in the greatest shape, who take a lot of marching-in-place breaks, or who even leave their platform and go off to the back of the room to drink water and pat down their sweat. You will not be an anomaly.

There are those men who may think a step aerobics class is below their level. Hmmm.

If this describes you, then join a step class and use three risers under your platform. Then see if you can keep up.

Another way to add intensity is to stay with two risers but hold small dumbbells throughout the class. Which brings me to the arm choreography.

If this turns off some men, that’s fine, because I’m put off by it too. In any of the step classes that I’ve ever taken part in, my arms moved the way they would if I were jogging.

I don’t believe in the arm choreography, especially since I do a lot of weightlifting.

If you feel the same way, just move your arms as you would if jogging. Problem solved.

Again, you do not have to mimic every single movement of the instructor in a step aerobics class.