Why Some Gyms Have Rubber Coated Weights Instead of Metal 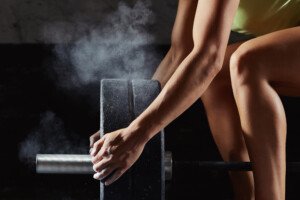 Have you ever wondered why some gyms have only rubber coated weight plates?

Why not just use the cheaper metal-surfaced plates? There are very logical reasons for this.

So why do some gyms use rubber coated weights (plates and dumbbells) instead of providing the weights in their natural metal form?

The answer seems obvious, but this question was actually a thread in a bodybuilding forum.

The thread starter asked why gyms use the rubber weights instead of the metal.

Ramming a metal-surfaced, 45-pound plate into another one creates a very loud sound.

The sound of letting such 45-pound plates drop nearly vertically onto another for some models of the calf raise equipment can be heard all over the gym.

With multiple people using multiple 45-pounders at once, the noise is considerable.

Rubber-on-rubber reduces the sound volume, though it can still be loud if a man deliberately slams a large plate into another when loading a leg press machine or bar for squatting.

Even 25-pounders against 25-pounders, when not coated in rubber, can be very loud.

The thread starter had mentioned that he enjoyed the sound of metal crashing against metal.

Some responders to his thread agreed. They admitted that the noise made them feel more macho.

It’s been said that if you want to protect your hearing from the damage caused by loud noise at a gym, to head on over to Planet Fitness.

But a snarky suggestion is never appreciated.

Gym operators who order only rubber coated weights know that there’s just no excuse for banging the plates, but they also realize that it’ll happen no matter what.

However, the sound reduction with the rubber IS quite considerable.

When I was out of town years ago I worked out at a gym with metal-surfaced plates.

They were grimy with rust and smelled. I hated handling them, my hands getting dirty and smelly.

Rubber weights won’t cause this problem, though I will admit, that sometimes rubber weights can smell pungent when they’re brand new. But over time, their “new rubber smell” will diminish.

Furthermore, the gym operator knows that the sleek, modern appearance will be less “intimidating” and more inviting to novice exercisers.