Can Dilaudid Cause Confusion and Cognitive Impairment? 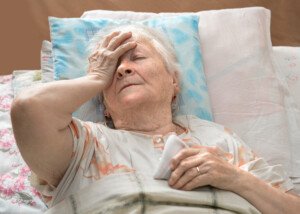 If your loved-one has been given Dilaudid (or other narcotic, mood altering, or sedating medication) at the hospital, and not long after shows cognitive impairment, it may very well be because of the Dilaudid, which is an opioid narcotic painkiller.

Every single time my mother has ever been given Dilaudid in the ER or hospital room, cognitive changes resulted.

When this first happened, I wasn’t sure if it was the Dilaudid or if something was truly wrong with my mother’s thinking.

It’s scary, to witness mental changes in a family member, especially when the nurse never tells you, “By the way, if you notice any cognitive changes or mental confusion, it’s probably the Dilaudid.”

But after witnessing the confusion and disorientation and irrational thinking in my mother a few times, it began getting predictable: “I’ve seen this before,” I’d comment.

For this article, I asked a physician if Dilaudid, a commonly dispensed painkiller in emergency rooms and hospitals, could cause cognitive impairment (temporary, of course).

“Dilaudid is a very powerful narcotic and can certainly cause confusion and altered mental status, often within 30 to 60 minutes of taking it,” says Jacob Teitelbaum, MD, medical director of the Fibromyalgia and Fatigue Centers nationally, and author of “From Fatigued to Fantastic!”

He continues, “As with any narcotic, changes in mental status would be normal, but often decrease over time as the body adapts to them.”

My first observation of Dilaudid with my mother was after her knee arthroscopy. I convinced myself that the irrational thinking and confusion had to have been related to “something they gave her.”

After the surgery my mother’s mental state deteriorated into deep clinical depression, and this in itself impaired her cognitive skills, a “pseudodementia.”

Soon after was double carpal tunnel surgery, and once again, she was on Dilaudid and talking confused, thinking irrationally. “It has to be the Dilaudid,” I reflected, though also concerned that the confusion might be psychiatrically based.

The effects wore off after she returned home. Several weeks later my mother went on Cymbalta, and any mental confusion or irrational thinking was eliminated.

A year later she was back on Dilaudid … after coronary bypass surgery, and holy smokes, she was in La-La Land.

And maybe lingering effects of anesthesia was involved, but my mother showed numerous signs of altered mentation, such as telling the nurses that I was a doctor (I’m a certified personal trainer).

At first my mother justified this because I was speaking “medicalese” to the nurses and doctors.

Then my mother began refuting my claims that I was not a doctor. Turns out my mother thought that I was her other daughter, who is a doctor.

When my mother came home, she thought she was still in the hospital and thought that I was a nurse.

This was scary stuff, because I also speculated that the heart-lung machine might have caused permanent cognitive impairment.

But during the hospital stay, my mother was given Dilaudid. The confusion dissipated after she was home.

A few days later she was back in the ER with grueling abdominal pain and given Dilaudid, and once again, she began thinking irrationally … until the drug cleared from her system.

Some weeks later my mother was in the hospital for a chronic subdural hematoma suffered after falling and hitting her head, and was given Dilaudid after the brain surgery to drain the hematoma. Once again, she was loopy.

Of course, I couldn’t help think that maybe this time, the loopiness and irrational talking was the result of brain damage from the surgery. It disappeared when she was taken off the Dilaudid.

Not long after, she was in for a second brain surgery; the hematoma had recurred.

This time she was very irrational and disoriented … more so than before, but I kept thinking it’s just the Dilaudid, and made a comment about that to the nurse.

The nurse told me that my mother had not been on any Dilaudid at all, but she was on Seroquel due to agitation the previous night.

I began thinking the neurosurgeon “nicked her brain,” or that “something happened during the surgery” that injured my mother’s brain.

Fast-forward: My mother fully recovered, and after researching chronic subdural hematoma, I have concluded that the deteriorated cognitive status resulted from her brain re-expanding to fill the space that the hematoma had taken up.

The neurosurgeon blamed the impaired mental functioning on a combination of anesthesia, surgery and painkillers, which included Dilaudid.