How Plus Size Women Can Stop a Gym Bully 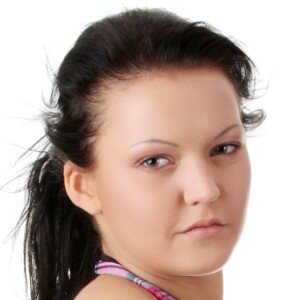 Contrary to popular advice, the overweight woman who’s “bullied” at the gym SHOULD confront the “bully.”

I was inspired to write this article after reading about an overweight woman, in an online forum, who complained that some 100 pound woman would make snide remarks and insults about her to another member, well within hearing range, whenever she was there.

This thread had quite a few responses, and only one responder suggested that this individual confront the rude woman.

And what did all the rest of the responders recommend?

Pretty much the same thing: They told the OP to just focus on her workouts, that she was there for herself and for nobody else (um, I think she already knows that), and that the bully was insecure and had problems of her own.

You get the picture.

This kind of talk does no good. I’m banking that after reading all the responses, the OP felt no different at her next gym visit under the same circumstance—which she had said kept repeating.

For Pete’s sake, you’re working out at a gym and you keep hearing someone making fun of you — GO OVER THERE AND STOP IT.

Ignoring a Bully Won’t Make Her Go Away

Are you an overweight woman who gets ridiculed at the gym?

There is only one way to stop a bully: confront her—or him. This is old-fashioned, non-PC advice that has worked so many times.

Problem is, many women have been taught, since childhood, to “act like a lady,” “don’t create waves,” “don’t be aggressive,” “just suck it up,” “just ignore it,” and “don’t lower yourself to their level.”

I say pooh! to all that!

This very poor advice does nothing to stop the harassment.

How would you like it if you were given this exact advice by your employer’s human resources department after you complained that a man kept verbally sexually harassing you?

Ultimately, the situation with the OP goes beyond being overweight. I’m sure there are other overweight women at her gym whom that 100 pound woman would never dare make fun of within earshot.

We can also safely bet that this 100 pound woman, in some other environment—perhaps the workplace, perhaps at family get-togethers, perhaps in her own house—behaves like a bully.

We can also safely assume that not all of her targets are overweight.

Some bullies are fat. Some victims are skinny. It’s all about psychology, not how big someone’s waistline is.

How a Woman (Overweight or Not) Can Stop a Gym Bully

Sometimes, victims are told to tell the perpetrator something like, “Saying that really offends me,” or, “That’s very rude of you.”

Why would confirming that the bullying is working make the bully stop?

Mean people target those whom they’re convinced will not create waves. But if the victim creates a nice big wave, the bully will flounder and drown.

Let anger, not fear or self-consciousness, well up inside you. This will be your fuel tank.

Keep calm, though, but gritty, and march over to the perpetrator and give her a piece of your mind.

This may be only a single sentence—spoken in a steely way—with bug-eyes: “You know something, Dearie, you’re really beginning to tick me off.” Then stare her down. Keep staring. Don’t blink.

But the truth is, for someone who’s been groomed to “act like a lady,” “don’t create waves,” “just ignore it,” turning on the opposite persona will be difficult.

But you MUST defend yourself. The bully isn’t paying for your gym membership!

You will NOT lower yourself to her level by giving her an angry piece of your mind.

In fact, that shameful bully needs a good spanking (figuratively speaking). Ignoring her teaches her she can get away with acting disgraceful.

If you choose not to stop someone at the gym from harassing you, then how are you going to teach your children to stand up to those who want to stomp all over them? How will you save yourself from workplace harassment?

Rehearse what you’ll say, including body language, at home before the actual confrontation. Rehearse. Over and over until it becomes natural for you to speak your mind.

Give that gym bully a reason to back down from you  — whether you’re overweight, scrawny or somewhere in between.