Does Lifting More Weight than Someone Mean You’re Stronger? 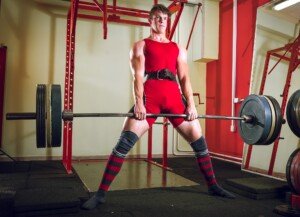 WHY the big gorilla who can lift more weight than you isn’t necessarily STRONGER!

If you can lift more weight, say in the bench press, than someone else, this doesn’t necessarily mean your chest and arm muscles are stronger than your opponent! I’m a former certified personal trainer and have observed some interesting displays of strength.

If you can deadlift 400 pounds and your buddy can pull 280, this doesn’t necessarily mean that you’re stronger in the deadlift.

Of course, it means you can deadlift more weight, and this would count in a competition. And it also looks more impressive to other gym members. But it does not mean you’re stronger at pulling!

It has to do with LEVERS.

Yes, there’s that taboo word again in the strength training community. If you have the same levers as your buddy, then yes, you truly are stronger with the deadlift or bench press.

However, levers often play a significant role in how much a person can lift. This isn’t about how “strong” a person is.

It’s about how much they can lift. These are not the same thing. Here is a very simple illustration that will make this crystal clear to you:

Imagine a very heavy rock on the ground. It is so very heavy that you must strain and grunt to place it on top of a 12-inch stool.

Now suppose your buddy has to pick up the same rock off the ground. However, your buddy’s assignment is to place the rock on an 18-inch stool. He can’t do it. He gets it off the ground, but just can’t get it up high enough.

In fact, he gets it 12 inches off the ground, but just can’t budge it higher and must drop it.

Does this mean you’re stronger than he is? Or does it mean that you had a smaller range of motion to work with? Hmmm.

Suppose your buddy’s range of motion was reduced to the 12 inches. With grunting and straining, he, like you, gets the rock up on the lower stool.

Unfortunately, change in range of motion (ROM) can’t occur this easily in powerlifting moves like the bench press and deadlift.

A person with long arms relative to their height won’t have to bend over as much to pick a heavy barbell off the floor. 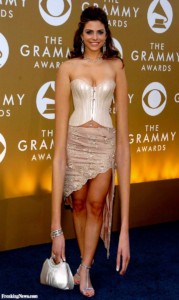 An individual of equal height, but with a shorter wingspan, but everything else being equal (e.g., hip height from the floor, femur length), will need to bend over more and/or squat deeper to reach the barbell!

This means he has more ROM to cover!

The T-rex guy had to do more work and move the weight through more space:

1) Bend over more to reach the bar, stressing his low back with a greater range of motion once he grabs the bar and begins straightening, and/or

2) Squat deeper to reach the bar, and though his back may still be fairly upright if he compensates only with a deeper squat, the deeper squat means more work for his legs and glutes on the way up with the bar due to more distance for his legs to “unsquat.”

His pal gets to bend over just a little bit to reach the bar, with only a partial squat. This means less ROM once he begins straightening with the bar in his hands.

This does not mean he’s stronger than the T-rex guy. It means he can lift more weight. Do you see how this doesn’t necessarily mean that he’s stronger in the absolute sense?

If the leverages were matched, it’s very possible that the T-rex guy would be stronger, or maybe not, or maybe equal in strength. 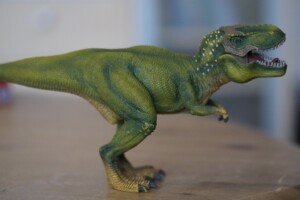 It’s not over. When these two men bench press, the T-rex guy has the advantage with his shorter arm span.

This means his elbows don’t have to go down as far when he lowers the barbell to his chest (assume both men use the same distance between their hands on the bar).

His arms are so short, relative to his height, that by the time the bar is to his chest, the angle formed by his elbow flexion is only 90 degrees. 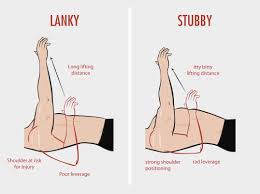 The gorilla guy, on the other hand, must flex his elbows to much less than 90 degrees, meaning, his elbows are closer to the floor; his arms are much more bent at the bottom of the lift.

He must press upward for a greater distance than the T-rex person.

That’s more distance to move the weight! As a result, he can only press the weight twice, since the greater distance covered completely fatigues him in only two repetitions.

The man with the shorter arms has less distance to move the weight; he takes longer to fatigue and can press the barbell 12 times. Does this mean he’s stronger?

He can press 400 pounds because the 90 degree angle of his arms minimizes the distance he must lower and raise the weight.

The deadlift champ can only press 275 because he must lower, then raise, the weight a greater distance. Is he necessarily weaker? No.

Recall the stool example with the rock to make sure you understand that levers (anthropometrics) often determine how “strong” a person is and how much weight they can pull or push.