How Much Weight Can You Lose with ONLY a Stationary Bike? 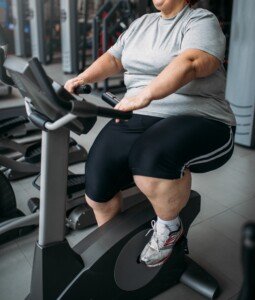 Yes, you can lose a LOT of weight with only a stationary bike, but only if you apply a specific technique to your pedaling.

Don’t expect much weight loss if all you do on a stationary bike is “pedal away” while watching four consecutive reruns of your favorite sitcom.

This is mindless pedaling, and though it burns more calories than sitting on a sofa throughout the TV shows, it won’t kill it for the weight loss you want.

Using only a Stationary Bike for Weight Loss: the “How to”

• Warm up for 10 minutes with easy pedaling gradually shifting to moderate pedaling.

• Do not use any programs, even the one called “fat burn.”

• You will manually control the settings.

• Put away the phone and magazine.

• The TV can be on, but don’t watch something that you can’t disconnect from during your “work intervals.”

• Your first two or three work intervals will be medium hard to gear up your body for what’s coming.

• After that then, for 30 seconds, you will pedal as fast as possible. Really go at it. There’s many permutations of settings; it can be light pedal tension and very high rpm’s, or medium pedal tension and fewer rpm’s, but still as much as you can muster, or, medium-high tension—and as many rpm’s you can handle.

• At the end of 30 seconds, slow to a slow pace and simultaneously change the settings to an easy pedal tension. Pedal this for two minutes.

• When two minutes are up—not two and a half, not three—return to the previous setting and blast away.

• If at the end of each 30 second work interval you’re not panting hard enough for the person next to you to hear you, or, you’re able to speak, then you didn’t pedal fast enough.

You must be WHUPPED after each sprint interval; unable to talk!

• The Journal of Physiology reports on a study by Gibala et al in which 10, one-minute sprints on a stationary bike, with one minute of rest in between, works for weight loss as well as “many hours of conventional long-term biking less strenuously,” says Professor Gibala from McMaster University.

• The 30 seconds on, two minutes off, protocol is a popular recommendation by fitness trainers, but there’s many ways to slice this. I personally prefer 30 seconds on, 90 seconds off, for eight “cycles.”

• The Gibala study also looked at sub-HIIT effort, meaning, not truly all-out pedal blasting, but furious enough to make the subject pant hard at the end. Sub-HIIT is ideal for newcomers or older people.

• Another study (reported in PLOSone) headed by Martin Gibala, a kinesiologist, showed the power of one minute cycling intervals for burning fat.

If you’re tired of the treadmill and prefer pedaling, or you have a condition for which pedaling is easiest on, such as peripheral vascular disease or obesity, then you’re in luck:

The stationary bike, as your only piece of aerobic exercise equipment, will result in weight loss.

BUT ONLY if you follow the protocols described above! Steady state or the so-called continuous training just won’t cut it. Yes, it’s better than sitting at home, but movement is not enough. It must be intense.

The good news is that the intense work intervals need last only for 30 seconds.

For best results, find the setting on the stationary bike in which you can barely—and I mean barely—complete 30 seconds.

As you near 30 seconds, your legs feel on fire, your thigh muscles are searing, and you truly don’t think you can make it to 31 seconds.

And when you’re done, YOU ARE NOT ABLE TO TALK.

For a one minute sprint interval, the rpm’s for the same pedal tension will be a bit slower, but not a lot slower.

Or, if you want to maintain the same rpm’s, you’ll need to lighten the pedal tension.

Find that sweet spot setting so that at the end of 60 seconds, you are breathless and panting like a cheetah that just lost its chase after an impala.

A weight loss regimen using only the stationary bike should be conducted three times a week (never on two consecutive days), in combination with a sensible eating plan.

For best weight loss results, do strength training on the non-bike days, two to three times a week.