Top Six Ways Men Can Be Rude at the Gym 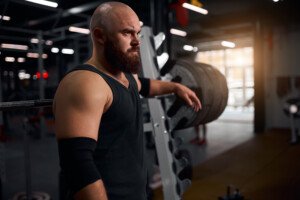 Men can be very rude at the gym in ways that you just don’t see with the gals.

You’ve read about how people, in general, can be rude at the gym, breaching gym etiquette left and right.

But here’s a list of six ways that seem to apply only to men. I’ve been hitting gyms for years and have seen it all  —  I think.

In no particular order, here are examples of being rude at the gym that almost always involve men:

No. 1. Grunting very loudly. I wouldn’t even call this grunting; it’s more closer to howling. Just the other day a man was doing this at every machine he was at.

No. 2. Wearing too much cologne. This rude gym behavior doesn’t happen often, but when it does, it’s really annoying. Covering up body odor is no excuse. Shower and use deodorant before you work out.

Otherwise, the rude behavior of stinking the gym up with cologne makes you seem like you’re there only to get dates.

No. 3. Slamming weight plates or letting weight stacks slam down. The only reason men commit this most rude gym behavior is to get attention.

If it had anything to do with running out of strength or fatiguing, then women would be doing this as well, and so would the 90-pound weakling men.

Men who inconsiderately slam around weights tend to be more muscular and experienced, but this is no excuse. It’s obviously an ego thing, a “Look at me, I’m the alpha male here!” thing.

What they don’t realize is that a leading cause of impaired hearing is repeated exposure to loud sounds.

So while these Einsteins will be bench pressing 250 pounds at age 70, they won’t be able to hear worth a darn.

No. 4. Leaving sweat all over equipment. This is one of the most thoughtless ways to be rude at the gym, and men lead the field, even though occasionally a woman will leave moisture on a bench. A towel, anyone?

No. 5. Leaving a ton of 45-pound plates on the leg press machine. Though I suppose it would be reverse-chauvinism to assume that the culprit is always a man! Even men don’t like having to unload someone else’s work.

No. 6. Body odor. Deodorant works. So when a man’s armpits are stinking up the gym, you know he didn’t use deodorant.

If you can think of additional ways men are rude at the gym, post them in the “comments” box below.