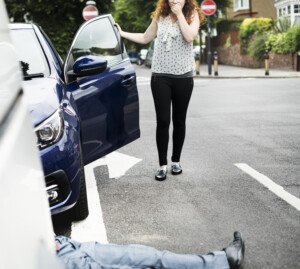 Have you seen those online videos of people walking smack in the path of an oncoming motor vehicle? HOW could they not see the vehicle coming at them?

In one of these videos, the camera is on a busy street. A bus is still. People are crossing the street.

A woman is walking in front of the bus, so close, she could easily touch it with her hand. The bus begins moving. She’s bumped and looks surprised, but a second later is under the bus…

In another video, a woman proceeds to slowly walk across a road on which a few motorcycles have passed.

The next oncoming bike is not visible yet, but her head is turned in its direction.

She clearly sees it, and instead of stepping back to let it pass, she begins trotting towards the other side of the street…and you can tell her eyes are on the oncoming motorcycle (the surveillance camera is fairly close to the scene).

One second after she begins trotting…BOOM! A blur smashes into her, and the aftermath appears fatal, including for the motorcyclist.

Why is it so difficult for pedestrians to judge that a vehicle will strike them if they proceed to cross the street?

“There are many reasons why people walk smack into the path of a motor vehicle and get hit,” says Carole Lieberman, MD, a forensic psychiatrist and author of Lions and Tigers and Terrorists, Oh My! How to Protect Your Child in a Time of Terror.

“Some might convince themselves that the motor vehicle will stop, and some dare it to stop.

“Others might be looking at the motor vehicle, but be totally distracted and not really seeing it.”

Feedback from a “human factors” expert would be more analytical.

It seems to boil down to an impairment in the ability to efficiently process environmental stimuli.

“Some might be under the influence of drugs or alcohol,” adds Dr. Lieberman. In a very small number of these videos (I’ve viewed MANY), the victim appears intoxicated.

But in most cases, the person who walks smack in the path of a moving vehicle appears sober and alert.

However, unlike the woman who got struck by the motorcycle, most victims — in “caught on video” films — are not looking in the direction of the oncoming vehicle.

Below is a video showing a woman sauntering right into the path of a vehicle.

She is clearly not paying attention and seems oblivious to the vehicle’s bright lights as they slowly close in on her. It’s as though this woman, who survived, actually wanted to be mowed over. Fast forward to 0.37.

It’s just so vexing that pedestrians can literally walk smack in the path of a moving motor vehicle!