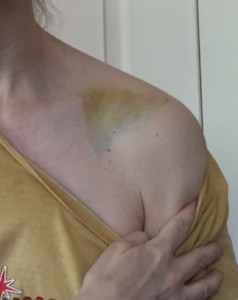 Bruising from a clavicle (collarbone) fracture may seemingly take forever to go away.

As I type this, I still have a green faint remnant of bruising from the clavicle fracture (nondisplaced hairline) that I sustained 54 days ago.

The image is of the bruising—before it reached peak appearance, meaning, the worst it got, from a visible standpoint.

I began seeing a very faint green tinge the day after the accident (I fell from a height), but it could pass for a vein—or at least, at the time, I tried to convince myself it was one of those green veins just underneath the skin, casting a faint green tinge.

But every day I looked there and noticed it was gradually becoming more prominent.

Again, the image shows what doesn’t seem to be much bruising, but it ultimately became quite prominent, looking as though an MMA fighter had slugged me there.

Years ago in martial arts class, I was told that it takes only five pounds of pressure to break the collarbone—at the point near its middle—the section that you can easily see in a person when they are facing you.

With a knife-hand strike, just five pounds of pressure will break this bone.

In my case, I landed on the cap of my shoulder, and this caused a hairline break at the distal end, meaning, towards the end of the bone at the outer part of my shoulder. The bruising was (and still is) mainly shades of green.

UPDATE: Day 58, I can barely see the faintest remnant of the bruising, under the clavicle where it has “leaked” to over time. It is so barely visible that I officially deem this as its last day of visibility.