What to Expect the Day AFTER Knee Replacement Surgery 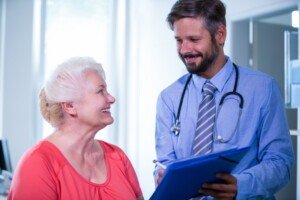 Are you worried about a loved-one who just had total knee replacement surgery, who seemed to be doing well and in high spirits several hours after the surgery, but then next day, seemingly has taken a turn for the worse?

Relax. This is normal. I know so because my father just had total knee replacement surgery.

The surgery for his knee replacement was in the late morning, and in the evening, I visited him.

He was in high spirits, feeling no pain (due to a “nerve pain block” that was still in effect), and his knee had what appeared to be several pounds of bandages wrapped around it, above it and below it.

The next day, I saw a completely different man. He complained of burning skin and a burning forehead, yet a chilled lower body; grueling pain in the knee despite having been medicated all day long with painkillers, and was depressed, downtrodden, dismal, and kept complaining that there had been no progress with the rehab.

His startling words were, “I have a gut feeling something is wrong.” He said he felt that the knee just wasn’t working at all during the rehab.

The morning after total knee replacement surgery, a patient is started on rehab.

In the surgery, the knee is literally replaced; the patella bone is removed and a titanium plate is put in, and in between the knee are metal parts that substitute for the cartilage that was originally there.

Despite such extensive surgery, the patient is given rehab the following morning.

He or she is held by rehab staff while trying to walk using a walker. Additionally, rehab involves various exercises.

My father kept saying how poor he had performed, and kept comparing this outcome to the morning and day following his first total knee replacement.

A nurse took his temperature to check for fever; his forehead was hot; he felt burning up; also felt chilled; but wanted the room cooler.

His temperature was normal. My father’s dampened spirits were spooky; I’d never seen him like this before.

This wasn’t just about knee pain.

There was the odd burning sensation in his skin and face; he appeared flushed; there were the chills in the lower body; and overall he just felt terrible, hopeless and was convinced that somewhere along the way, there was a mistake made.

He even entertained the idea that the nerve pain block damaged the nerve in his upper leg.

The nurse kept assuring him that the rehab went “perfect” and that he was ahead of schedule.

The nurse showed no worry and kept smiling, insisting that my father would feel “200 percent better” the next morning.

She was not able to say if any of the medications were causing side effects, and despite continually reassuring him and his family, he was convinced he was doomed, and just lie there, projecting hopelessness and having given up.

Next day, two days out from the total knee replacement surgery, there was a complete turnaround.

He’d been given a different painkiller which was working — no pain — and not only that, but the rehab went great; he was in very high spirits. A complete turnaround.

So if your loved-one seems out of character with abnormal dejection and feelings of hopelessness the day after total knee replacement surgery, you must realize that the next day, he or she will likely feel just fine and ready to take on the world.