Do you fear that the green in your vomit means cancer?

Perhaps you’ve upchucked lately and couldn’t help notice that the color of your vomit was actually green. Now that can sure be unsettling.

However, this green in your vomit doesn’t mean that anything is seriously wrong with you such as cancer.

In fact, a truly serious sign is when you see red in your vomit — from blood.

Don’t fret; it’s nothing to worry about. I myself have never seen green in my own throw-up, but I understand that this can frighten people who do happen to notice this odd color.

Gastroenterology is the medical specialty that deals with the gastrointestinal tract (intestines and stomach organ).

“Green color in vomit can occur either because of green food, or more commonly from vomiting bile from the intestine which has a yellow/green appearance,” says Edward Cruz Paredez, MD, a board certified gastroenterologist based in La Jolla, CA.

If you’ve noticed that your vomit is green, ask yourself if you’ve recently eaten broccoli, cucumbers, kale, spinach or other such produce. 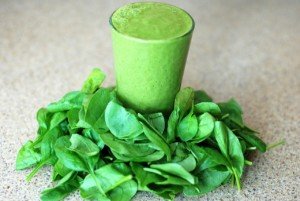 Dr. Paredez continues, “Yellow/green bile is made in the liver out of bile salts and pigments/colors.

“These salts aid in digestion and are secreted into the intestine just past the stomach to mix with food contents from the stomach.

“Vomiting green bile can occur in a number of instances and is not specific for ‘how sick’ someone is or what the cause of vomiting is.

“Most people aren’t accustomed at seeing their own vomit and panic when they see the green color, even if they know it is from bile.”

So when you see this hue in the content that you just upchucked, it’s actually the bile that comes from the liver.

“Vomiting green bile often alarms people since they may not have eaten anything green and they do not realize that the body makes bile continuously for us to digest our food,” says Dr. Paredez.

As mentioned before, blood in the vomit warrants a trip to the doctor for evaluation.

However, blood can also manifest as brown, appearing like coffee grounds.

When you throw up, don’t be afraid to take a good look at its contents or color.

If throwing up is accompanied by any other symptoms, see your physician.

So you now know that green vomitus is not a sign of cancer.

However, you should investigate why you’re puking in the first place.