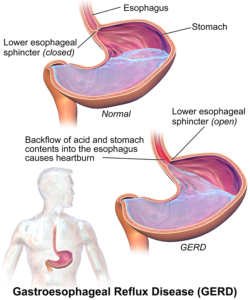 Acid reflux is a very common problem and can cause a number of symptoms, but the most common is “heartburn.”

“It affects more men than woman and is associated with advancing age, smoking and obesity.”

Reflux can ocur due to increased acid production and/or a weak esophageal sphincter muscle that doesn’t close properly, allowing acid to go up the esophagus.

This is why you should never blow off the situation with “Oh, it’s just acid reflux.”

Dr. Fuksina explains, “With longstanding damage from acid reflux, the lining of the esophagus — normally consisting of flat squamous cells — can transform into columnar cells — leading to a precancerous condition (Barrett’s esophagus) and possibly esophageal cancer.”

TV commercials for heartburn are typically of a comical nature. This creates the illusion that cancer is nowhere downstream from this common condition.

But once a person develops Barrett’s esophagus, they must receive lifelong surveillance of the interior of their esophagus to catch any abnormal changes in time before they transform into a malignancy.

About one to two percent of cases of Barrett’s turn into esophageal cancer — which has a poor prognosis.

Chronic acid reflux that affects the throat is a risk factor for laryngeal cancer, though that risk is small as well.

Acid reflux that affects the throat on a chronic basis is called LPR: laryngopharyngeal reflux disease.

Symptoms include cough, a hoarse voice, a sore or burning throat, a sensation of a lump in the throat and an unpleasant taste in the mouth.

Not Always a Burning Sensation

It can also be described as “pain” by some sufferers — and very bad pain in the chest that can make a person think they’re having a heart attack.

When the throat is affected, this doesn’t mean that there are chest symptoms; sometimes the only symptoms are throat related.

Despite the absence of chest symptoms, however, there may still be acidic contents in the esophagus.

Here are numerous articles about acid reflux — you’ll probably find exactly what you are looking for.