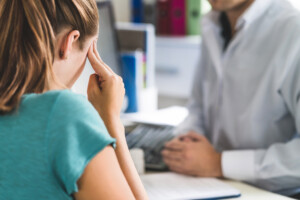 Have you been noticing a very gradual onset of mild headache that gets worse into evening, but never gets past a level 5 on a 1 to 10 pain scale, and in fact, is usually a level 1 to 3, or even one-half?

I had this experience and was baffled, though early on, I figured it was a low-grade sinus infection, since the character of the headache fit that of a sinus headache.

I had no other symptoms; no stuffiness or congestion in my nose, no runny mucus from my nose or feeling of heaviness behind the nose.

There was no apparent trigger of the headaches.
However, I noticed that in a minority of cases, it was more pronounced or felt more like pressure when I bent over.

It also usually felt worse—noticeably worse—when I lied on my back. This suggested a sinus related cause, says mayoclinic.com.

It felt like a tension headache or a dehydration-caused headache, but I was getting plenty of water and wasn’t under more stress than usual.

Exercise suppressed it. Sometimes I didn’t realize it was there till it was there, because its onset was so gradual. I never awakened with it.

This was occurring several times a month, up to eight or nine times, but usually four or five or so times.

I eventually figured out the cause of the headaches:
Using a Q-tip to “scoop out” dry chunks of mucus from my nose in the morning, and sometimes I’d have to do this later on in the day or in the evening.

The scooping had irritated a nerve located just up a bit in my right nostril.

I accidentally discovered this one morning when I was sticking the Q-tip up the right nostril to pull out some mucus. BAM! In an instant, like a light going on, the headache appeared.

It felt identical to the headaches I’d been having for several months…except it was stronger.

I felt it in the three key areas I’d been feeling it all along: back of head, behind eyes, across forehead. (Sometimes, the headache would present in just one or two of these areas).

I removed the Q-tip, and like a light switch being flipped off, the headache instantly vanished.

I reapplied the Q-tip, and voila, the light switch went back on instantly. I removed the Q-tip: instantly gone.

I put it in again, and nothing. I tried again, and the light went back ON.

This was freaky. I removed it, realizing that this nerve obviously went to the back of my head (or at least towards it) and was sending signals there when its tip in my nose was getting irritated.

My theory:Years and years of scooping finally caught up with me. I began scooping several weeks after having a nose job many years ago, but this was also shortly after I moved to a very dry climate, which can cause a buildup of dry mucus in the nose overnight.

Scooping would irritate the nerve.
The reason the headache was delayed (it would come on later in the day or even later in the evening) was because the scooping caused a situation that invited a very mild infection—again, my theory.

This infection then buzzed the nerve, making it send referral pain to the back of my head and behind my eyes.

The point of actual trauma (irritation) to a nerve does not necessarily cause pain in that spot.

I finally saw an ear, nose and throat doctor. He didn’t go for my theory, but thought it might be related to seasonal allergies and told me to take Allegra, which did no good. He also prescribed an anti-bacterial ointment.

Application of this ointment at both nostrils before bedtime prevents the headaches for the most part.

I’ve also been scooping less aggressively (the doctor had told me to stop scooping; but it’s the only way to clear my nose).

If you have mysterious headaches, consider that the cause is aggressive cleaning out of your nose.

Par back on the aggression; don’t poke anything up as far as you’ve been doing and see if that makes the headaches go away.

If it doesn’t, see a doctor.