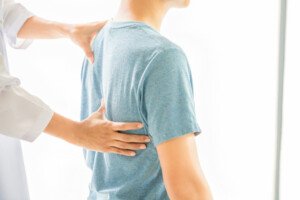 You may have what looks like a winged scapula, but it may be something else that’s benign.

In my case, the diagnosis was “functional weakness of the parascapular muscles.”

The name is odd in that I had no weakness. I had no limitations in range of motion, no stiffness, aching or pain.

I lift hard and heavy at the gym, so any weakness or deficit would have been easily noticed.

One day I noticed what looked like a winged scapula upon viewing my shirtless back in a mirror.

However, I did not see any pronounced appearance of the scapula upon doing the three classic tests for a winging scapula: 1) wall pushup, 2) shoulder abduction and 3) shoulder flexion.

The doctor I saw, a non-surgical sports medicine specialist, had me do these three things too (I had by then already done them numerous times). Oddly, he used the word “subtle” more than once to refer to my condition.

He said I could keep doing what I’m doing at the gym (I told him exactly what I do), but suggested physical therapy and gave me the number for that. I made an appointment after I got home.

Nevertheless, the doctor does not expect this situation to become a performance problem; it’s a cosmetic problem, if anything.

Functional weakness of the parascapular muscles means that for some reason, those muscles are being activated differently than the ones on the other side.

The doctor also pointed out that on many of his other patients, the disparity (pseudo-winging) would not even be noticeable, due to higher levels of body fat in those patients.

But I told him my weight was the same two months prior, when I did not have this condition (which I would have easily noticed back then if I did have it then, when I was viewing my bare back during a self-skin exam).

Nothing had happened to me between then and this doctor visit; no injury, fall or collision involving my shoulder or back.

Things just somehow got a little off-kilter or out of balance. The doctor said there is no damage to the thoracic nerve, tendons or muscles. The X-rays were normal. “Everything looks pretty darned good,” he told me.

Don’t be alarmed that you might have something sinister going on with your “winged” scapula just because you fail the three tests for the condition.

There are some alarming conditions out there that involve lumps on the scapula, such as chondrosarcoma—but I do not know if this cancer would make the scapula appear to wing. Furthermore, chondrosarcoma is exceedingly super rare!