Is Dizziness from Exercise Different than from Anxiety? 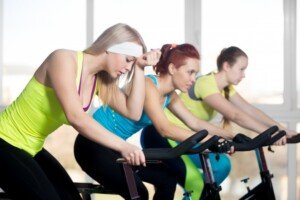 Anxiety can cause you to feel dizzy, and so can exercise.

There are different kinds of dizziness, and each has different causes.

Anxiety is a common cause of dizziness.

However, if you feel dizzy after or during exercise, this can be caused by 1) Lack of nourishment; low blood sugar, or 2) The actual exercise itself, such as pivoting ‘round and ‘round on a stepper.

After all, the dizziness from anxiety is triggered by the rapid breathing that anxiety causes.

However, exercise, too, causes rapid breathing, but normally, a person will not get dizzy from exercise.

I’m a former certified personal trainer and rarely did my clients report feeling dizzy during or after exercise.

The few times this has happened involved clients who hardly ate anything the entire day prior to their exercise session with me.

“When people exercise they breathe rapidly because their muscles require more oxygen, and they also need to breathe out the excess carbon dioxide that is produced during exercise,” explains Peter Swanljung, MD, chief of psychiatry at the Malvern Institute in Willow Grove, PA.

“So the increased breathing is a result of the body functioning appropriately in response to exercise.

“When someone is anxious, they are breathing more rapidly than the body needs them to, and thereby are releasing too much carbon dioxide, which can cause the pH of the blood to rise and cause a constriction of the blood vessels in the brain, leading to a dizzy sensation.”

There are many other causes, such as premenstrual syndrome, and quickly rising to a standing position after being seated for a while.

A very pervasive cause is prescription medications, such as statins and antidepressants.

And of course, pregnancy can cause the sensation as well. Sometimes, unknown causes are at play.

In general, for the most part, if you feel dizzy, this is no cause for alarm.

Often, you know what the cause is right then and there: Are you premenstrual?

Did you just quickly stand up from a seated position? Have you not eaten anything all day?

Did you just try a new dance move that required some spinning?

Are you ill from a “bug” or the flu? Did you recently bang your head?

Are you on a new medication?

Rarely, dizziness is a sign of serious trouble, such as a transient ischemic attack.

A TIA is recognized by the medical establishment as an emergency situation that signals the possibility of a full-blown stroke in the near future.

However, the dizziness of a TIA is usually accompanied by any of the symptoms listed below. 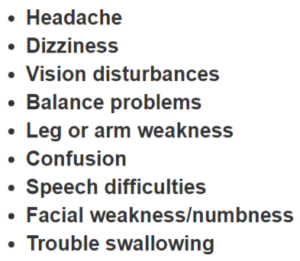 Dr. Swanljung is the former medical director of the general adult unit at Friends Hospital in Philadelphia and treats a variety of psychiatric conditions.