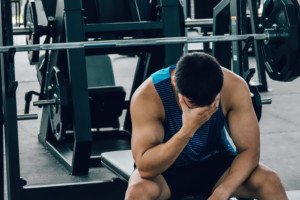 A doctor gives an explanation for feeling dizzy after exercise and how to manage this problem.

I’ve had personal training clients complain of dizziness during exercise. These were people who weren’t, let’s say, in the best of condition, but otherwise healthy.

But at some point during the exercise, they got dizzy. This didn’t happen often, though.

“These include, most often, dehydration and salt depletion.”

A person who’s out of shape or not accustomed to intense exercise may get dizzy simply because their body is not used to the training stimulus of rigorous exercise. Often, these clients did not adequately hydrate themselves, and/or ate poorly in the hours prior to the workout, if at all.

I’d work these clients harder than what they were used to, and if they did not have adequate nourishment all day long preceding the workout, it was no surprise that they’d get dizzy at some point during the exercise session.

Another possible cause of dizziness during exercise is the motion during the exercise, such as doing pivoting movements in a step class – these involve half-turns and can cause some head spinning.

Some group fitness classes involve 360 degree turns, and these will cause an inexperienced person’s head to spin.

Another potential cause of dizziness from working out is doing something that requires balancing, like walking on a treadmill without holding onto the rails. I’ve had people tell me that if they let go, they’ll get dizzy.

The cure for this is to let go but walk very slowly, so that the body doesn’t readily sense anything different.

As the body adjusts, you increase the speed while still keeping your hands at your sides and swinging naturally.

Angina is diminished oxygen flow to the heart due to narrowing of coronary arteries.

Other symptoms of angina are shortness of breath and chest pain brought on by only light exercise (stable angina), or spontaneously during rest (unstable angina).

Other possible causes of dizziness while hitting the gym: Meniere’s disease, pregnancy, PMS and side effects of medications.

If you get dizzy during physical activity and it isn’t remedied with adequate hydration and food intake, as well as avoiding specific motions that trigger dizziness like spinning around in a hip hop class or doing headstands, an evaluation by a doctor would be a smart idea.