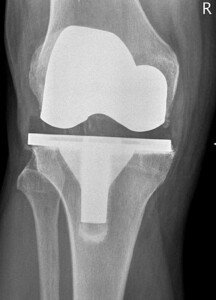 Can stem cell therapy work on a knee that’s had a total replacement?

An orthopedic surgeon who also uses stem cell treatments was asked this question by me, at his seminar, regarding my father who had a total knee replacement in each knee.

This was after the doctor presented information on stem cell treatments for painful joints—the injection would go into tissue, not hardware.

My father had seen many doctors to find out why both knees (post-TKR) were still so painful.

He got different responses from each doctor (including a diagnosis of peripheral neuropathy), and none were able to diagnose him with a failed TKR, though one said that the bone scan showed that they “might” be loosened.

However, he was quite interested in my father’s situation and wanted to give it a try—he was so interested that he reduced the payment by 50 percent.

He is a board certified orthopedic surgeon who performs surgeries on knees, hips and shoulders, and he has performed the stem cell treatment on many patients including former professional athletes (with success), giving it about a 75 percent success rate.

My father, having tried everything, including electro-stim therapy from a chiropractor, endovascular back surgery (since the knee pain was blamed on spinal stenosis by a few doctors), massage and oral and topical painkillers, figured he had nothing to lose.

The doctor allowed me to observe the procedure, which involves injecting the patient’s stem cells into the painful joint.

Though my father has hardware in both knees, the doctor found a “soft” spot where there was tissue, and made the injection there.

The stem cells were harvested from my father’s pelvis, then centrifuged for 12 minutes to separate them from the rest of the blood matter (3,000 gees).

The doctor said that if this is destined to work, it will take three to four weeks.

The stem cells are supposed to reduce inflammation as well as deliver oxygen and nutrients to the joint—a location that normally doesn’t get much blood circulation.

So, the reduction in inflammation, and the increased amount of oxygen and nutrients, will hopefully result in a notable pain reduction.

Stem cell therapy, as described by the doctor, is a one-time administration, though some patients who experience no alleviation of pain will go in for a second injection and then get results.

But if the first injection works…there’s no need for any additional injections down the road, because the stem cells multiply on their own—but, like cells anywhere else such as skin cells, have a turnover rate, so that the total amount of cells at any given time remains constant and controlled..

If this procedure works for my father’s knee pain, the doctor will know he’s really on to something.

UPDATE: The stem cell therapy never made any difference.

But remember, it was done on a patient with hardware in his knee, which is not the norm for this procedure.