Shortness of Breath vs. Trouble Breathing 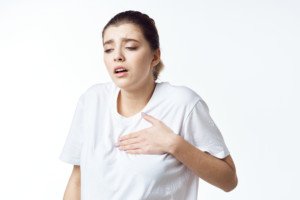 “Shortness of breath” and “difficulty” breathing are NOT one and the same.

I’m in perfect health and have shortness of breath all the time—after completing strenuous routines at the gym or running up hills outside.

However, despite all these shortness of breath episodes, I never have difficulty or trouble breathing.

Shortness of breath is not the same as trouble with breathing.

It’s crucial that you don’t indiscriminately toss these terms around when describing your symptoms to a doctor.

A person with an episode of vocal cord dysfunction will experience difficulty breathing.

In VCD, the passageway through which air enters to get into the lungs becomes constricted, so the person has the sensation of struggling to inhale air.

“Trouble breathing would be a patient’s complaint, that of being aware of some kind of difficulty with the act of breathing,” says Marc I. Leavey, MD, a primary care physician with 40+ years of experience.

“It would be difficult to align that term with the nomenclature used by physicians and nurses.  Shortness of breath describes the sensation of not being able to get enough air.

“There may or may not be pain associated with this; one could call it ‘air hunger.’  A medical term normally used is dyspnea, which means difficult breathing.

“While the causes of shortness of breath can range from pulmonary to cardiac, and even to some gastrointestinal conditions, the description used can blur the differences between the terms.”

If you’re merely “out of breath” after sprinting down the street after your dog, this doesn’t mean you’re struggling to inhale.

If anything, it’s proof of how well you can breathe —you’re rapidly taking huge breaths.

A person with a VCD or asthma episode will have actual trouble with breathing, though with asthma the trouble involves exhaling.

A person with certain heart conditions will feel the classic “shortness of breath” or that of being “winded” while performing activities that previously did not quickly tire them out.

There’s nothing necessarily wrong with their lungs or airways. It’s just that the body isn’t getting enough oxygen—due to a problem with the heart, such as inadequate pumping.

At least once in my life I had what seemed to have been a VCD episode. I didn’t feel short of breath or winded when it happened, but when it happened, I struggled to inhale, to breathe in air. It was like my airway was reduced to the diameter of a straw.

The first episode was apparently triggered by air pollution or particulates in the air as I walked in the middle of the night through an industrial section of town. The episode lasted about 30-40 seconds.

The second incident occurred many years later. I was in a building that had recently been renovated, and I could smell all the chemicals in the air.

Seemed that something in the air got caught in my throat and made me cough a few times. Then right after, I could barely inhale.

I would inhale as deeply as possible, but it felt as though my airway was as narrow as a straw. This episode lasted about 15-20 seconds.

Congestive heart failure classically causes “shortness of breath” while the patient is at rest. But this doesn’t mean the patient has trouble breathing.

Laryngopharyngeal reflux (LPR) often causes difficulty breathing (the airway is affected), but not shortness of breath.

These two terms truly do have different meanings, so be sure you understand the difference when talking to your doctor. For more about LPR, go here.