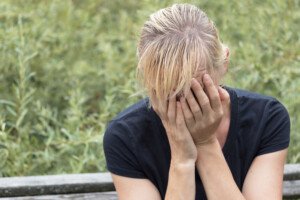 Constant muscle atrophy checking is a common experience with people who are plagued by an obsession they might have ALS, a deadly, incurable disease that results in muscle atrophy.

ALS is very rare, striking about 5,600 Americans yearly, so why would anyone be consumed by fear of ALS and perform constant muscle atrophy checks?

If you found this article, you know exactly why, so I’ll cut to the chase.

Once you reach a point where you are constantly checking the suspect body part in the mirror or without a mirror, for signs of muscle atrophy, your mind must be retrained or reprogrammed.

This will not occur overnight, but it CAN be accomplished. Checking for muscle atrophy often takes place in front of a mirror.

But often, sufferers will do this without a mirror if the suspect area is on a hand, foot or calf.

The first step in overcoming the compulsion to continuously check for muscle atrophy is to realize that the body is not symmetrical. 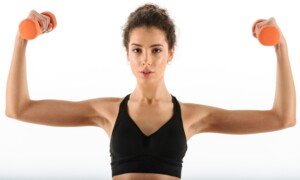 Check out the benign asymmetry in this woman’s upper arms. Freepik.com, drobotdean

The body is not symmetrical.

Your dominant arm, especially its upper part, will almost always appear bigger than the non-dominant arm.

This is how you should think, rather than, “Why does my non-dominant arm appear smaller than my dominant arm?”

You know that old saying? “If you look hard enough for something, you’ll find it”?

Think way back, perhaps during childhood, when you just happened to realize that one side of your body did not look like the other.

What happened after that? Did you panic? Did you obsess and spend huge amounts of time every day checking for muscle atrophy?

Or did you think nothing of it after one and a half seconds?

“Our bodies are not bilaterally symmetrical,” says Marc I. Leavey, MD, a primary care physician with 40+ years of experience.

“An old trick from the pre-Photoshop days was to take a straight-on photograph of someone’s face, cut it down the middle, reverse one side and put the two versions of one side together, producing an image which did not resemble the original person.

“With computer graphics you can do this, which used to take hours, in seconds.

“Even identical twins have subtle differences.  If you are right handed, your right arm will be a bit more developed from the increased use over years.

“Similar changes are in the legs, where you may be ‘right legged’ or ‘left legged.’  We are not ‘cookie cutter.’  Deal with it.”

Even bodybuilders and physique athletes, who fight for “perfect symmetry” for their posing routines, often can’t nail it. 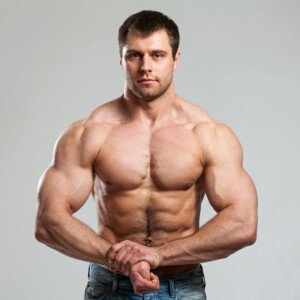 At first glance the bodybuilder above seems to be perfectly symmetrical. But keep looking.

His right arm (or left from your view) has a dent just below the insertion point of the deltoid, midway between the biceps and triceps. No such dent is visible on his left arm.

A bulge appears above his right armpit that’s absent above the left.

Note the dent under his left collarbone. It’s missing on the right side.

To someone with health anxiety, this man might have ALS. But he’s a strong, fit bodybuilder!

Every time you enter your bathroom to relieve yourself, brush your teeth, even comb your hair, do NOT turn on the light.

Flipping on the light will encourage checking for muscle atrophy.

If you start spotting “dents” in the suspect area, ask yourself where on earth you got the idea that “dents” are a sign of ALS. 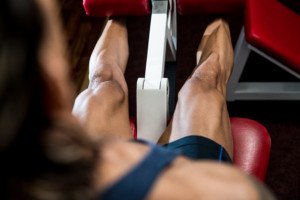 Engaging the quad muscles brings out the “dents.” Shutterstock/Jasminko Ibrakovic

Panic over dents is quite common in people who spend inordinate amounts of time performing muscle atrophy checks, yet, where in the ALS literature does it state that dents are a symptom of ALS?

Nevertheless, there is an explanation for dents: not enough body fat to conceal muscle topography!

Open a bodybuilding magazine. You’ll see tons of dents in the athletes because they hardly have any body fat between the muscles and skin.

They are dent city. Think of dents as muscle definition. Isn’t that what everyone wants? Some nice definition?

A person’s six-pack abs are full of dents! Dents are good!

Keep reminding yourself that NOWHERE in the annals of medicine does it state that the human body is supposed to be symmetrical.

Check for muscle atrophy on other people. You’ll find it everywhere and on everyone:

Check the bare legs of someone walking ahead of you. One calf is almost always bigger.

Or one thigh might be a little more curved.

Check another person’s arms. You’ll see lack of symmetry there, too.

It is perfectly normal for one foot to be bigger than the other! In fact, I asked a podiatrist (physician who specializes in foot/ankle/lower extremity conditions) about this.

“In regards to patients who present to my office with a foot problem that only affects one foot, it is not uncommon to find that one foot is a different size,” says Alan L. Bass, DPM, Medical Director, NEMO Capital Partners, LLC.

“Many times problems such as plantar fasciitis, forefoot pain, jamming of the joints of the foot is caused by improper shoe gear due to the fact that the patient is wearing a pair of shoes of one size, but one of the foot is a different size, either length and width,” explains Dr. Bass.

Dr. Bass is with Central Jersey Foot & Ankle Care, and is a Fellow of the American College of Foot and Ankle Orthopedics and Medicine. basspodiatry.com/our-foot-doctor