Can You Die from a Single LPR Choking Episode? 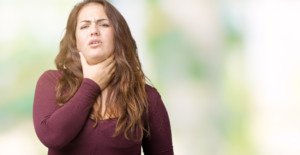 Though untreated LPR can lead to fatal esophageal cancer, can you choke to death from one “I can’t breathe” episode of laryngopharyngeal reflux disease?

LPR causes many symptoms, and one of them is a sudden sensation that the airway has become constricted, making it difficult to INhale air (though there’s no problem exhaling).

It feels like you’re inhaling through a straw, and the sufferer may think that they’re going to die.

“The patient needs to relax; people do not die from these symptoms, as scary as they may be,” says Dr. Stacey Silvers, MD, of Madison ENT & Facial Plastic Surgery in NYC, who is board certified in otolaryngology; one of her specialties is sinus surgery.

Though LPR has been suggested as a cause of sudden infant death syndrome, this has not been proven, and SIDS continues to remain a mystery.

Furthermore, the 50 million Americans afflicted with LPR do not have to worry about choking to death or passing out and never awakening from the sudden feeling that they can’t breathe.

During such an episode, try panting heavily like a dog; that might restore normalcy. Otherwise, stay calm and wait it out.

Dr. Silvers explains, “The patient can take some liquid Gaviscon which is fast acting to suppress the reflux and coat the throat (the European Gaviscon is best and can be purchased online).

“The patient should see an ENT who will confirm the diagnosis of LPR or silent reflux.  Avoid late night eating; this is the number one trigger of nighttime breathing and choking symptoms.

“Acid reflux will worsen sleep apnea, and in some patients will cause their sleep apnea.”

A wedge to allow an elevated sleep position will help. It’s also possible that a person’s LPR can be caused by a problem with the diaphragm or the esophageal sphincter.