Can Itching Be the ONLY Symptom of Melanoma? 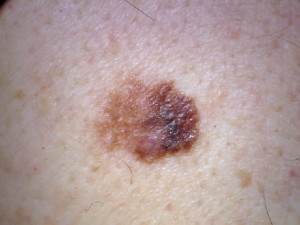 Perhaps you already know that an itching mole is a possible symptom of melanoma.

But what most medical sites do not say is whether or not this itching is almost always, or usually, or sometimes or rarely accompanied by other symptoms of a cancerous mole or lesion—such as crusting, bleeding, darkening or an increase in size.

“While itching is occasionally something that my patients relate as the symptom that brought them in for a mole or even a melanoma, it is very uncommon, actually,” says Dr. Joel Schlessinger, MD, a board certified dermatologist and cosmetic surgeon who has a private practice in Omaha, NE.

“That is why melanoma is so scary, as there can be no symptoms at all other than the changes in color.  Moles, on the other hand, do tend to have times that they itch and even bleed.

“Interestingly, I have often seen patients who have presented with a very significant melanoma and they go so far as to state that they didn’t come in because it wasn’t itching ‘yet’.

“The important thing to remember here is that itch as a symptom that might be worth listening to is a very poor way to decide whether or not to see the dermatologist for a suspicious mole.

“While it may be a part of or reason to suspect that a mole is changing to be irritated, it doesn’t often correlate with the onset of a melanoma.”

If you suspect that a mole is itching, first be sure that it’s actually the spot that’s presenting with this symptom.

In other words, perhaps there’s a tiny bug bite only a centimeter away from it that’s the source of the itching.

Or maybe there’s some other irritant very close by that was caused by a stiff tag on your clothes.

But if you’re sure it’s the mole, the itching more likely than not has a benign cause if the spot otherwise looks normal, unchanged, non-evolving.

The irritation may have been caused by clothing.

Nevertheless, it won’t hurt to have a dermatologist examine it; don’t sit back and think, “Well, I’ll just keep an eye on it to see if it starts changing color or getting bigger before making a doctor appointment.”