Is the Deadlift Dangerous for Obese People? 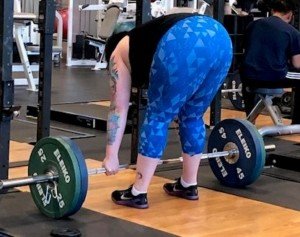 Getting into position for the deadlift.

Obese people should perform the deadlift (above) to burn fat.

The deadlift is one of the best fat-burning exercises a person can do, yet extremely few obese people do this exercise.

If you were to round up all the clinically obese people who perform deadlifts, the vast majority of them would be football linemen, wrestlers (fake or real) and competitive powerlifters.

Hardly any of the obese men, and especially women, who do deadlifts are your average very overweight people who are not involved in competitive sports in which size can be an asset.

If only obese men and women knew how much fat-burning power the deadlift has.

It has a potent fat-burning effect because #1, it works practically the entire body all rolled up into one movement, and #2, the nature of the movement allows you to lift a considerable amount of weight.

Because so many muscles work at once in the deadlift, a hormonal response is generated that triggers fat-burning for hours.

But the weight moved must be heavy enough to induce this effect. Heaviness is relative; it must be heavy to that particular person. 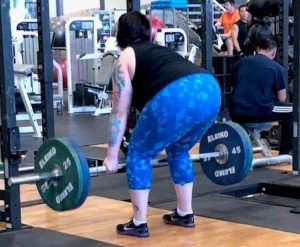 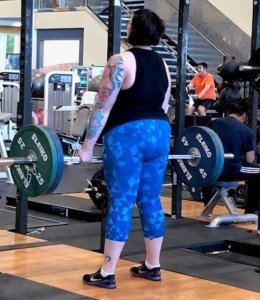 Many obese people believe that lifting heavy weights will make them bigger.

Lifting weight, of any amount, will NOT make your fat cells bigger! Intense weight lifting works marvelously to reverse obesity. Handling light and easy weights will not shear off body fat.

When a beginner starts out with the deadlift, one should practice with a light barbell to master the form.

For many obese exercisers, this movement is no more dangerous than for skinny people.

What makes the deadlift potentially unsafe is bad form, which can be committed by someone of any size. So form must first be mastered before moving on to challenging loads.

Once form is mastered, you should gradually increase the amount of weight that you can lift for 8-12 repetitions. Increases will come slowly. Do not hurry.

By being consistent, you can increase the amount lifted quite a bit, over time.

And why try to keep increasing the amount? Because this progressive resistance will build lean, sleek muscle, which will eat away at excess stored body fat — even for the morbidly obese.

Muscle tissue is demanding and hungry, and will feast on stored fat in your stomach, thighs, hips, wherever it’s stored in excess.

However, the average obese person who wants to lose significant amounts of body fat doesn’t have to worry about one day deadlifting 500 pounds!

That’s because enormous strength, and the massive muscles that come with it, don’t happen by accident.

The average woman who’s never strength trained before can deadlift only about 75 pounds for 8-12 reps.

An obese person should do deadlifts twice a week, 4-5 sets excluding a few light warm-ups.

Trust me on this: Deadlifting will do far more for slashing fat in an obese individual’s midsection and legs than will the inner and outer thigh machines and the crunch machines.