How Long Does It Take Golfer’s Elbow to Heal? 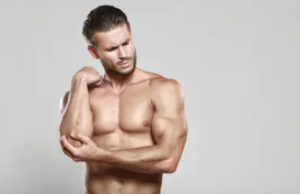 How long does it take to get rid of medial epichondylitis, also known as golfer’s elbow?

I developed a case of medial epichondylitis (golfer’s elbow) after doing high reps, low weights, with a close-grip on a cable pull-down (palms facing each other).

The discomfort initially wasn’t that great, and I actually continued working out full-force with rows and even doing chin-ups and neutral-grip pull-ups with full body weight.

Over the next few weeks the discomfort morphed into pain—not sharp pain but a strong dull pain, if that makes any sense.

This is an inflammation of the tendon on the inside of the elbow. I went to an orthopedic doctor to see what she had to say, and she diagnosed it as medial epichondylitis.

She told me to avoid strength training exercises that aggravate it. She gave me a wrist brace to wear at night to prevent wrist movement, explaining that the problem is linked to wrist action.

She also said take an anti-inflammatory, ice the elbow, and over the next 3-4 months, it will heal.

A Mr. Olympia bodybuilding champion told me something a bit different.

At the time, I was editor of a fitness magazine that he contributed a column to, so that’s how I knew him.

He said to strengthen the wrists by doing wrists rolls, because this would strengthen the forearm muscles, which tie into elbow function: Strong wrists mean strong elbows. 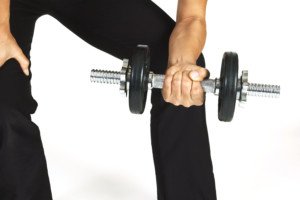 I wore the brace most nights (I’d sometimes forget); avoided offending activities; initially took an anti-inflammatory but stopped; and did the wrist rolls.

I also did what has proven to be very effective at healing my past tendon injuries (I’ve always lifted weights), and that is to (believe it or not) perform the offending activities but with a very light resistance—not enough to induce discomfort.

However, I did, with very light weight, close-grip pull-downs, plus biceps curls and rows. There was only slight improvement over the next 3-4 months.

I eventually stopped doing the wrist rolls, mainly because I kept forgetting to do them.

Then I injured my fingers rock-wall climbing (not acutely, but over a period of several climbing sessions, I strained them).

Treatment for this was a special way of using a hand grip device, which of course, strengthens the wrists and forearms. I did this over the next six weeks, healing the injury. 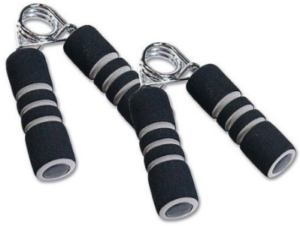 How I Did the Hand Grip Exercise

Not long after, I became aware that the medial epichondylitis didn’t seem to be as bad. I just didn’t feel it as much, and slightly increased the weight on the offending activities.

There was no discomfort, but I could sense that if I were to go all-out on these activities, I’d feel the golfer’s elbow.

Over several weeks, I gradually increased resistance, and with each increase, did not feel the golfer’s elbow.

I’d perform the offending activities three times a week at the conclusion of weight workouts.

Eventually, the resistance was at a point where it began slightly taxing me (still no golfer’s elbow pain), and not long after, I dropped it down to twice a week, since the resistance was now heavy enough to qualify as a mild work set.

This improvement continues. The resistance is nowhere near what would be a true work set for me (I like to go heavy for an 8-12 rep max), but it’s heavy enough to induce a feeling of some work, albeit mild.

I expect to continue increasing this weight incrementally, so that eventually, I’m doing an 8-12 RM.

So how long have I had medial epichondylitis or golfer’s elbow? A year and a half.

That stinks. But I anticipate full recovery, finally, and look forward to blasting out those chin-ups.

Edit: I have fully recovered from golfer’s elbow and have no pain deadlifting very heavy weight or doing pull-ups/chin-ups.