Do Blacks with Freckles Have Higher Melanoma Risk? 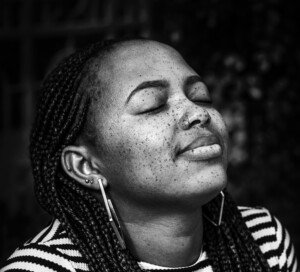 Do freckles raise the risk of melanoma in a black person?

But what about black people who have freckles? After all, people with freckles are overwhelmingly of the Caucasian race.

Blacks do get freckles, and being black does not insure against developing melanoma.

The question is: Do freckles in blacks raise their risk of melanoma?

“Yes. Overall assessment of one developing a melanoma does not depend on a single factor,” says Joshua L. Fox, MD, founder and director of Advanced Dermatology, P.C., of New York and New Jersey.

“It depends on various factors such as skin type, personal or family history of melanoma, life-time accumulative UV exposure, etc.

“Thus, we can attribute one’s risk based on one or two physical differences.  I have diagnosed melanoma in blacks.

“Their high risk areas (different than that for Caucasian) are palms, soles, mouth and under the nails.”

People with dark skin are 20 times less likely to get melanoma than Caucasians (who have no family history of this disease), but this doesn’t mean they can’t develop it.

However, blacks are more likely than whites to develop a certain kind of melanoma, called acral lentiginous (ALM).

ALM accounts for half of the melanomas that occur in dark skin.

What’s even more troublesome about ALM is that it develops in locations that you wouldn’t think are at risk for skin cancer: soles of the feet; palms of the hands; beneath fingernails; and even on mucous membranes that line the nose, mouth and anus.

However, this doesn’t mean that a nail streak that connects to the base of the nail bed is necessarily a melanoma.

These indefinites are why all people, including blacks and even dark skinned blacks, should examine their skin monthly and have annual screenings for melanoma by a dermatologist.

Dr. Fox explains: “Once a person is at higher risk, the risk is not only in the area of freckling, but in all body areas, particularly in areas of high risk for African Americans.

“These are the palms, soles, nails, mouth and other mucous membranes.”

In 1987 Dr. Fox founded the AAD Melanoma and Skin Cancer Prevention Program in Queens, NY. He has been chief of dermatology of several major teaching hospitals including Mt. Sinai Hospital of Queens.