Can a DVT Go Away on Its Own? 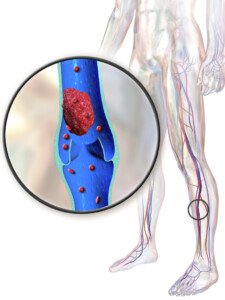 A deep vein thrombosis (DVT) can be deadly, but does this mean it can’t go away on its own?

If you suspect a DVT, get to the emergency room, because a deep vein thrombosis can travel to the lungs and cut off your air supply, killing you.

My mother was diagnosed with a “big DVT” in her jugular vein soon after coronary bypass surgery, but, believe it or not, it went away on its own.

Just when the DVT formed is not known; it may have formed during surgery or in ICU recovery.

It fattened her arm and I insisted on an ultrasound. However, nothing was done for this blood clot because the infusion of a clot-busting drug, said the doctor, would have put her at risk for lethal internal bleeding.

She was already on the blood thinner Coumadin as a regular post-bypass therapy, and thus, administration of a clot-busting drug was contraindicated.

So I asked the doctor, “What about this DVT in her neck? Can’t anything be done to break it up?”

He said that there was a “slim” chance that it would dislodge (travel to lungs).

I was told that her body would “reabsorb” the DVT, that it would “resolve on its own.”

How true is this?

“DVT, when it resolves, usually does “resolve’ on its own,” says Steve Elias, MD, FACS, director of Center for Vein Disease and The Wound Healing Center at Englewood Hospital and Medical Center in Englewood, NJ.

“Even when patients are using blood thinners for DVT treatment, the blood thinners’ role is to prevent further DVT from developing,” continues Dr. Elias.

“Blood thinners do not dissolve DVT. The patient’s own body’s enzymes do. So yes, in theory, a patient not on blood thinners can resolve their DVT.”

So over the next several days after her surgery, I knew that this big DVT was just sitting in my mother’s neck.

I knew that there was nothing to stop a piece of it, or the whole thing, from becoming renegade and getting into her lungs and becoming a pulmonary embolism.

I watched her arm like a hawk over the next several days to see if it was getting even bigger.

However, I noticed that the alarming swelling was gradually going down. Ultimately, the swelling disappeared.

At some point along the way a second ultrasound showed that the DVT had gone away.

Nevertheless, if you suspect a DVT, don’t think it will always “reabsorb” or “resolve on its own.” Even if you’re young or an athlete. DVT means ER.

At the time of my mother’s deep vein thrombosis, I didn’t know about special filters that can be inserted in the patient’s vein to trap blood clots that have migrated from their origin and are heading towards the lungs.

However, filter insertion is usually for patients who cannot take Coumadin or other anticoagulant drugs, or when these drugs are not effective.