The “World’s Tallest Children” is on TLC and will certainly keep airing.

I recommend that all the tall youth out there who are agonizing over their height, tune in to the next airing of World’s Tallest Children.

There are too many teen girls out there, standing only 5-10 or 5-11, who cry daily over their height.

If they watch World’s Tallest Children, they will meet 15-year-old Marvadene from Jamaica, who–at the time of filming–was 6 feet 9 and one half inches. 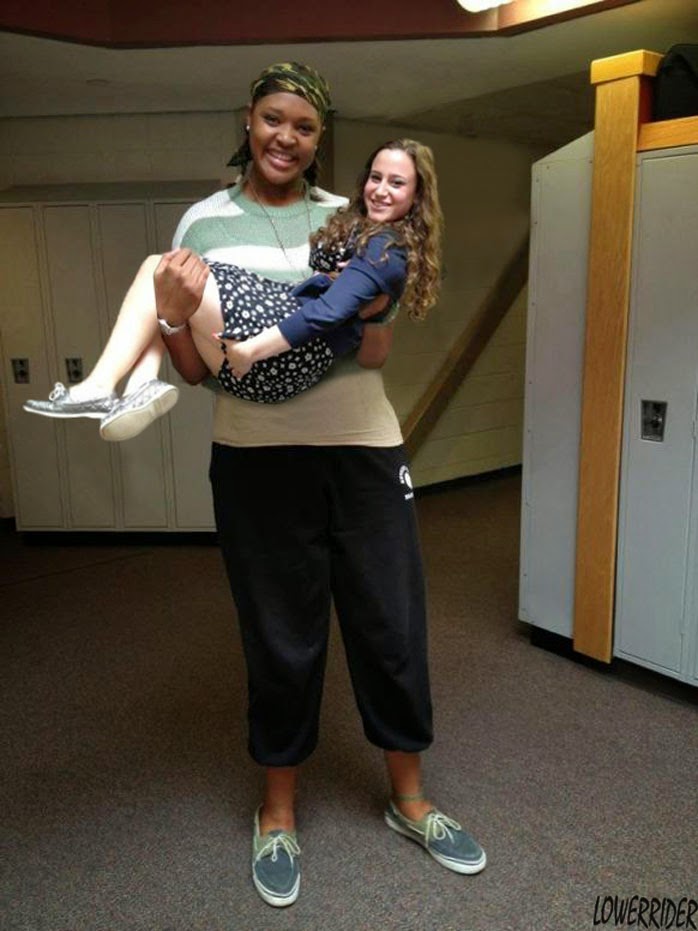 Marvadene Anderson was a teen at the time this picture was taken.

At the end of World’s Tallest Children, Marvadene says she likes being tall, after the narrator says she wouldn’t mind growing a few more inches. Marvadene is naturally tall and has no medical problems.

But Brennan is apparently the only person in the world who suffers from an unnamed genetic abnormality that has led to his great height. He suffers from joint pain and cannot run well.

Marley is from Thailand, and at age 17, is the world’s tallest girl (at the time of filming), beating out Marvadene by one-half inch.

However, Marley suffers from a pituitary tumor that causes excessive release of growth hormone.

The tumor has grown back after it was surgically removed twice.

Her impoverished family is hoping that newfound fame as the world’s tallest girl will enable them to purchase the expensive drugs that might neutralize the tumor.

I was disturbed by the case of Angelique. She is a perfectly healthy 8-year-old who towers over her classmates, standing at 4-7, the height of the average 10-year-old.

Her father, Nick, is 6-9, and expressed deep concern over how tall Angelique would grow to be.

He said he was picked on during his school years, explaining that if a kid could pick on the tallest kid in the school and get away with it, that this would establish the bully as leader of the pack.

Nick had a chart that he was using to monitor Angelique’s height. Angelique said that being the tallest in her class was “cool.”

But her father had a much less mature attitude, worried that eventually, kids would pick on her.

Though at first, this might sound like a very caring daddy, this very attitude has the potential to shake Angelique’s self-confidence and make her develop a very negative body image.

This “caring” attitude can lead to extreme self-consciousness and persistent slouching in Angelique.

It can even lead to bouts of crying, social isolation and a harmful obsession with her height.

Shame on Nick for fixating too much on his daughter’s height. He then arranged to take her to a doctor to get an adult-height projection.

Amazingly throughout all this, Angelique seemed resilient. But when kids are made to feel like something is wrong with them or defective about them, sooner or later they will break.

Angelique is taller than 99 percent of girls her age, yet her adult-height projection came out at 5 feet 8 and one-half!

The father expressed relief. She didn’t seem too relieved to learn it would be only 5-8.

You really need to watch World’s Tallest Children to appreciate the dynamics here. I hope the girl hits six feet!

For Pete’s sake, Nick, be thankful she’s healthy, rather than suffering from life-threatening conditions like Marley and Brennan!

Tune in to World’s Tallest Children; you’ll get a kick out of Marvadene, whose older sister is 6-4.

If you have a very tall daughter who’s overly concerned about her height, or you, the parent, are unable to accept that your daughter may one day be exceptionally tall, both of you should watch World’s Tallest Children. You’ll learn a lot from 6-9 Marvadene (who’s now 6-11).