Why Are 2 Knee Replacements at the Same Time Better than One? 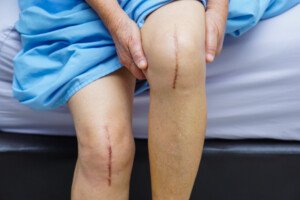 For many patients, this is the way to go. But for some patients, it’s definitely off-limits.

Have you been told that you need a total knee replacement for both joints?

“Advances in surgical techniques and improvement in the prostheses we use have improved outcomes and reduced recovery time,” says Douglas Fauser, MD, of Somers Orthopaedic Surgery & Sports Medicine Group.

Many patients with degeneration of this hinge joint suffer from severe symptoms in both joints and need bilateral total knee replacement.

My father was such a patient, but he elected to have one knee replacement at a time, with about 12 months between the two surgeries.

For him to have had both knee replacements at once would have been disastrous.

“The patient undergoes a single surgery and anesthesia, a single hospital stay and a single rehabilitation period.

“Studies have also shown that simultaneous replacement is associated with a lower risk of post-operative infection and mechanical malfunction compared to two separate procedures.”

According to one study, 95 percent of bilateral knee replacement patients said they’d have it done this way again.

My father chose to go straight home after several days in the hospital. He was nearly helpless.

The house had a staircase leading to my parents’ bedroom. He’s elderly and was close to 190 pounds.

At one point he got stuck on a stool in their bathroom, unable to get to his feet.

He was not a crutches candidate, and could not transition from the stool to the walker right before him, even though only one knee had been replaced.

My mother could not lift him and she called for me (I was staying with them to help out).

Just getting from the bed to the commode next to it was a major struggle. Using the downstairs toilet was a major production.

And then there was the surgical stocking. This thing was unbelievably hard to put on every morning (my mother or I did it, as my father could not bend forward enough to do it), and pulling it up caused pain at the surgical site.

Showering was a major task even though my father did his best to maneuver into the stall with his non-surgical leg and sit on the shower seat.

More than once, we all talked about how incredibly difficult the experience would have been had he undergone two knee replacements at once.

We were flabbergasted that an overweight acquaintance of his had actually had both knees replaced at the same time.

We couldn’t understand how this woman recovered, unless she had had live-in aides or had stayed at a skilled nursing facility.

Most studies show that the rates of cardiac, neurological and pulmonary complications following bilateral total knee replacement are higher than for unilateral, especially for people over age 80.

“Advances in surgical technique, anesthesia and recovery management have made total knee replacement a safe and effective option for more elderly patients than ever before,” says Dr. Fauser.

“But those patients who are older are also likely to be sicker and at higher risk for cardiovascular and respiratory complications.

“Clearly, every patient, along with his or her doctor, must carefully weigh all the factors and risks in deciding between simultaneous and staged knee replacement.”

So will it be both knees replaced at the same time or just one knee replacement? It’s not the easiest decision.

Dr. Fauser is a founding partner of Somers Orthopaedic Surgery and Sports Medicine Group which was formed in 1988.