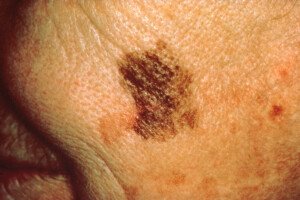 A second surgery for sentinel lymph node removal, if you’ve just been diagnosed with melanoma, may not be necessary, if your doctor knows about the MCW Melanoma Cocktail.

As a new skin cancer patient, you may already know that a sentinel lymph node biopsy might be in order, to see if any melanoma cells are in nearby lymph nodes.

Key to five-year melanoma survival rate is the ability to detect metastasis in a fast, accurate manner.

The quicker that melanoma is “staged,” the sooner doctors know precisely what the treatment protocol is.

Acupath Laboratories has a technology that eliminates the need for a second surgery for newly diagnosed melanoma patients.

Not only is a second surgery eliminated, but the technology eliminates the 1-2 days’ anxiety that the patient must suffer awaiting results of the sentinel lymph node biopsy.

Depending on how “deep” the tumor is in the skin, the biopsy will be required.

The routine protocol for this consists of the initial surgery to remove the melanoma tumor, and then a biopsy of the sentinel lymph nodes is taken.

However, it takes 24-48 hours for the results of the sentinel lymph node biopsy to come back. During that time, the patient must endure anxiety.

Furthermore, if the biopsy of the sentinel lymph nodes comes back positive for melanoma cells, the patient must then return to the doctor for additional surgery, to remove the surrounding nodes.

With Acupath’s MCW Melanoma Cocktail, it can be determined, right then and there during the first surgery, if the sentinel lymph nodes test positive for cancer cells.

The MCW Melanoma Cocktail was developed by researchers at the University of Wisconsin.

Because the mixture can detect cancer cells within 30 minutes, any need to remove the sentinel lymph nodes for additional study can be done right there, during the very same surgery.

“Surgeons and pathologists can now determine in the operating room during a patient’s first surgery whether the sentinel nodes show sign of metastasis,” says George Hollenberg, MD, a dermatopathology specialist in Plainview, NY, and former medical director of Acupath Laboratories.

“If so, the remaining nodes can be removed during that same surgical procedure, eliminating the second invasive surgery entirely.”

If surgery is planned to remove a spot that you think might be skin cancer, ask your surgeon if he or she knows about the MCW Melanoma Cocktail for on-the-spot sentinel lymph node biopsy results during the first surgery.