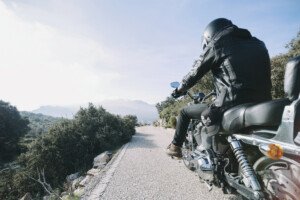 Which is worse for the motorcycle rider’s hearing: the roaring engine or the roaring wind?

Hearing loss is a real threat to the toughest motorcycle rider, and it seems as though the volume of wind noise gushing past a helmet has gotten much more attention than the volume of the bike’s engine.

“Both can be damaging to the ear — but surprisingly few motorcyclists realize the risk to their ears,” says Rivka Strom, AuD, CCC-A, Director of Audiology, Advanced Hearing NY Inc.

“Studies have shown wind noise to be high in level and increasingly louder as the speed picks up.

“Although there are helmets to protect motorcyclists’ ears, they are not always efficient at reducing necessary levels, and each one must be evaluated for effectiveness for the rider.”

A study in 2011 by researchers at the University of Bath and Bath Spa University placed microphones at varying locations around a helmet that was on a mannequin’s head, to determine the precise location of greatest volume of wind noise (produced by fans for this study).

However, it had, by the time of the study, already been well-documented (e.g., McCombe) that the “whooshing” wind sound over a biker’s helmet as he speeds down roads will surely lead to some degree of hearing loss.

The greater attention to the helmet issue may be because few motorcycle riders would ever suspect wind rushing over a helmet as a possible cause of hearing loss.

Though the helmet wind volume may exceed a particular bike’s engine volume, this in no way invalidates the potential for motorcycle engines to play a prime role in hearing loss.

Consider that often, a biker will rev the engine while in idle. The biker gets plenty of loud-engine exposure without the noise of wind stealing the show.

So just how loud is a motorcycle’s engine?

University of Florida researchers revved up the engines of 33 different bikes:

About half delivered volumes over 100 decibels (a dB is a unit of sound volume). In fact, at 65 mph, a motorcycle’s engine can reach up to 116 dB.

The Occupational Health and Safety Administration warns that exposure to 100 dB is safe for only 15 minutes.

The University of Florida report says that nearly all the motorcycles that were tested reached “action-level noise, which in the workplace would require ear protection.”

A motorcycle enthusiast may think, “Well, what’s a little damage from my engine or helmet, what with all the rock concerts I attend?”

A rock concert can generate volume at 120 dB, which, according to OSHA, is safe at only seven and a half minutes of exposure!

The motorcycle rider may also figure why bother worrying about engine and wind noise, when he spends a lot of time using power tools?

Every bit of concern helps.

A motorcycle rider should wear earplugs. Custom-made work best and last a lot longer than store-bought ones.