Do Thoracic Aortic Aneurysms Have a Genetic Cause? 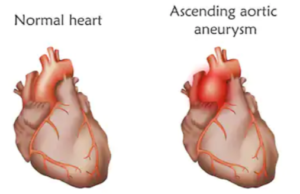 A thoracic aortic aneurysm is a bulge in this great blood vessel that can kill a person within minutes if it rips open.

A genetic basis for a thoracic aortic aneurysm has been the subject of research.

The vast majority of people who suffer an acute aortic dissection have a pre-existing aortic aneurysm, which typically grows over time but usually produces no symptoms.

The genetic variant is on chromosome 15, discovered by researchers (Milewicz et al), and the study report was published in 2014.

The gene involved is called FBN1. It has already been established that mutations in FBN1 cause Marfan’s syndrome, which predisposes patients to aortic aneurysms and hence, AAD.

“Genetic cause for aortic aneurysm have been known but poorly understood,” says Michael Fiocco, MD, Chief of Open Heart Surgery at Union Memorial Hospital in Baltimore, Maryland, one of the nation’s top 50 heart hospitals.

“There appears to be familial aneurysm disease, but the gene that is causing it has been elusive.

“The one that is known is the aneurysms associated with Marfan’s syndrome.

“That gene has been identified on chromosome 15 and is related to the entire syndrome (tall, slender, hyperflexible joints, aortic aneurysm/dissection propensity).

“The abdominal and cerebral aneurysms remain a work in progress to find the genes.

“Various studies have shown that if a first-degree relative has an abdominal aortic aneurysm, you are 2-4x more likely to have one than someone without that family history.”