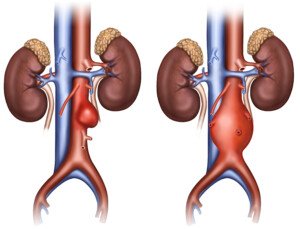 In plain English, here are the pros and cons of endovascular vs. open repair of abdominal aortic aneurysms, described by a vascular surgeon.

From an intuitive standpoint, it seems as though endovascular repair of an abdominal aortic aneurysm would have far greater benefits than invasive, open surgery, including increased survival rate and decreased risk of infection, stroke and cardiac arrest.

“I do not believe that any vascular surgeon that performs EVAR (endovascular aortic repair), would offer this procedure to a younger, relatively healthy individual – one who is able to do bench presses or weight lift,” says Seyed-Mojtaba Gashti, MD, a board certified vascular surgeon with Broward Health Medical Center in Florida.

Dr. Gashti points out that if he himself had an abdominal aortic aneurysm, he’d opt for the open technique, given that his current state of health is otherwise good, and he also says that the open technique is the preferred method among the physicians who invented this procedure, if they too, had the condition. The world’s first EVAR was performed in Russia in 1987.

Dr. Gashti continues, “You have to realize that EVAR was originally thought of because we had patients with large abdominal aortic aneurysms but with significant co-morbidities which made them very poor surgical candidates.”

A co-morbidity is an additional ailment that has the potential to complicate a surgery beyond what are the normally-established complications.

For example, a co-morbidity might be poor kidney function. Open surgery on someone with impaired kidneys dramatically increases risk of life-threatening complications.

“So we told them to go home and hope that the abdominal aortic aneurysm did not rupture. Endovascular repair provided an alternative to this option for this group of patients,” explains Dr. Gashti.

Today, about 75 percent of abdominal aortic aneurysms are repaired via endovascular. Most patients are men over age 70.

Dr. Gashti continues, “But one has to realize that, yes, it is true that this is a very minimally invasive procedure, initially, but the rate of re-operation for things such as endoleak, migration, device separation, thrombosis, fracture, etc., is much, much higher than the traditional open repair.”

An endoleak refers to leaking blood. Migration refers to shift in position of the stent graft. Device separation means the stent separating from the aortic wall; “This is when different pieces of the stent graft separate from one another,” says Dr. Gashti. Thrombosis means blood clot.

He adds, “When I repair an abdominal aortic aneurysm openly, I do not image their abdomen for at least five years post-surgery, because there is no reason to do so. These procedures (surgical) have been proven to be very durable.

On the other hand, a patient post-EVAR needs a CAT scan of abdominal (abdomen)/pelvis with IV contrast (dye) every three to six months for the first two to three years, and every year after that for the rest of their lives; that is if everything is okay.”

Picture the hassle of all of these imaging tests, not to mention the anxiety of worrying that the next test might show a leak.

“Just imagine the amount of radiation and cost that is involved,” continues Dr. Gashti.

“This is because we still do not know what the long-term results of endovascular repair are.

“So for a younger individual – younger than 60-65, with a smaller aneurysm who wants to be active with isometric exercise, I think that it would be reasonable to consider repair, but only via open technique.”