Rhinoplasty: How Painful Is a Nose Job; First Person Account 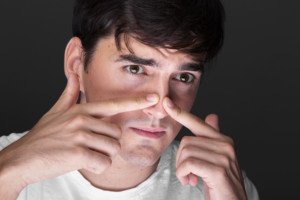 Years ago I had nose surgery, a.k.a. rhinoplasty or “nose job,” and there was some pain involved.

I had a deviated septum and a past mild fracture, so a nose job was in order. It’s not pretty recovering from rhinoplasty.

But a nose job actually has little pain because painkillers dull the pain.

Thinking of getting a rhinoplasty? I say get your rhinoplasty. Mine left no scars.

My nose used to be bulbous and crooked. The fracture was either from karate, volleyball or both.

The hardest part of a rhinoplasty may be finding a plastic surgeon you can trust. I remember lying on the gurney and being given anesthesia.

Next thing I knew, I was lying with my eyes closed and sensed that the surgery was over.

My nose was packed tightly with something and I had to breathe with my mouth open.

The first week following a nose job is terrible. Though painkillers numb the pain, other things happen.

Because my nose was packed tightly with wads of some kind of material, I had to constantly breathe with my mouth open.

The sensation of the tight packing was NOT like a mere stuffy nose from the common cold. It felt like cement was jammed up both nostrils.

As a result, I was not able to sleep for longer than 20 minutes at a time, because I’d be awakened by a very dry mouth from breathing with my mouth open.

During my waking hours, I had to always have with me a little plastic saucer to cough and spit out chunks of blood and other body tissue that were leaking down my throat from my nasal passages.

Because my nostrils were packed solid, the big gobs of blood could only go down my throat and then get coughed up and out of my mouth.

The taste and sensation were horrendous, and I would cough and spit it up.

I remember being in a store, holding the saucer, when an “attack” of blood suddenly occurred.

Right then and there, I coughed chunks of blood and solid matter into the saucer, and some lady witnessed this. She kept staring.

The packing stays in for a whole week following surgery. This means that for a week, you can’t taste any food or beverages.

A few days after the nose job, my face began looking as though I had been beaten.

There was extensive bruising under my eyes, and my eyelids were swollen and bluish-purple-green. My nasal area was swollen and partially bandaged. 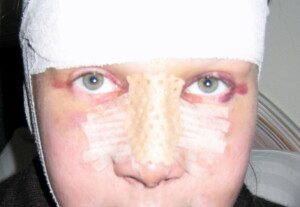 After the bandages come off, you’re not out of the woods. I had to massage my nose several times a day, apply a cream, and gently push my nose upward so that it would further mold into the shape that I wanted: ski slope shaped, slightly upturned.

I can honestly say I have a great nose. Most people, at least in my opinion, have a lousy one, one that turns downward; the tip being lower than the nostrils (a la Paris Hilton !).

The plastic surgeon said that the surgery fixed things so that my “snozz” will never turn downward as I get older. After all, the nose never stops growing.