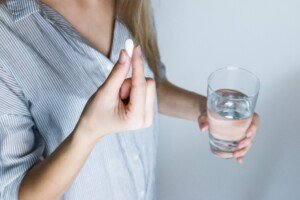 Is this just a gimmick or is there TRULY a difference between regular vitamins and prenatal vitamins? Isn’t a vitamin a vitamin? After all, aren’t all supplements the same?

I went as far as wondering if the word “prenatal” simply referred to when the vitamins were being taken (“prenatal” meaning prior to the baby’s birth), as opposed to a special type of supplement.

I’ve always thought that the only difference between supplements was whether or not they were organic/natural or synthetic.

“Many people do consume prenatal vitamins when not pregnant,” says Randy Fink, MD, Director of the Center of Excellence for Obstetrics & Gynecology in Miami, FL.

“Many women feel they see a recognizable benefit to their hair and nails from the prenatal, and ‘prenatals’ are also marketed for women in the pre-conception period.

“But is there a difference between the prenatal vitamin and a standard multivitamin?”

Thus, there is indeed a difference in the makeup of prenatals when compared to regular, conventional supplements.

Dr. Fink explains, “The prenatal vitamin will contain slightly different doses of some of the micronutrients when compared to a multivitamin.

“But prenatals contain less vitamin A, as high doses can be toxic to a developing fetus.”

Iron and zinc are valuable minerals — needed for optimal functioning of the body, especially a body that is carrying a baby.

Before supplements were formulated in a laboratory, women who were pregnant somehow managed without prenatals, right? Well, perhaps not.

After all, before modern medicine, the infant mortality rate was exceptionally higher than it is today. In fact, during ancient times, it was very high.

This is why the life expectancy for primitive man has typically been calculated to be exceedingly low: The infant mortality rate is factored in, which markedly brings down the average!

In addition to the high infant mortality rate during earlier times, the rate at which women died in childbirth was far greater than it is today. Nevertheless, the human species survived and proliferated.

It’s conjecture whether or not the consumption of prenatal vitamins could have made a major difference for women before the advent of modern medicine.

However, if your OBGYN recommends prenatals, it’s wise to take this advice; supplementation according to the physician’s guidelines certainly won’t harm a pregnant woman.