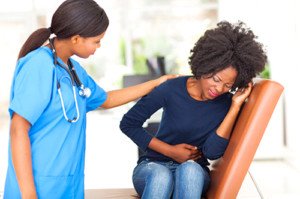 Here’s what a cancer-gyn doctor says about ovarian cancer vs. IBS symptoms.

There are many articles or forum postings online with titles like “ovarian cancer vs. IBS” or “Is it IBS or ovarian cancer.”

I decided to get information straight from a gynecological oncologist: a physician who specializes in cancer of the female reproductive system.

Justin Chura, MD, is a gynecological oncologist with Crozer Health in Delaware.

The report consists of two tables that show a comparison between the symptoms of ovarian cancer and non-OC-related symptoms, as well as IBS.

“They were also more likely to have bloating, increased abdominal size and urinary symptoms compared to IBS patients.

“Additionally, ovarian cancer patients were more likely to have a combination of 3-4 symptoms compared to the IBS patients.”

The Vagueness of Ovarian Cancer Symptoms 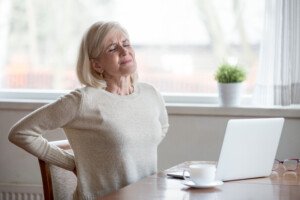 “The issue is that the symptoms for ovarian cancer are what we call non-specific,” says Dr. Chura.

“Patients with uterine cancer have a very clear symptom which is bleeding after menopause.

“Thus, these patients get diagnosed at an early stage because they seek medical care.

“For ovarian cancer, there is no symptom that identifies the disease at an early stage.

“Furthermore, there is no screening to identify the disease at an early stage.”

Some IBS patients report a lot of pain, which can be in the leg and back (OC can also cause these symptoms), and they can get a lot of diarrhea and constipation—including alternating.

The overlap between the symptoms of IBS and ovarian cancer have the potential to be markedly similar — and on paper, outright identical.

So what should you do?

First of all, get this in your head: IBS is a diagnosis of exclusion! A doctor shouldn’t be sure that you have IBS unless all other causes of your symptoms have been diagnostically ruled out.

“You could have IBS” is told to patients quite often, and I myself even heard this from the GI nurse who was prepping me for my colonoscopy to find out why I was having strange diarrhea and altered BMs.

My condition turned out to be microscopic colitis—but the diagnosis was verified under a microscope. However, IBS remained a differential diagnosis up till that point.

There is no diagnostic test for IBS.

If you’re being told you have IBS, you’d better be sure that all serious (and benign) differentials have been diagnostically ruled out.

Unfortunately, the only diagnostic test for ovarian cancer is a biopsy of the “mass” on/in the ovary. Even an internal ultrasound cannot diagnose.

If you’re having troubling symptoms or “vague,” “non-specific” symptoms that, on paper, point equally to IBS and ovarian cancer, see a gynecologist first. Ask, “Are my ovaries okay?” Then take it from there.