Why You Suddenly Can’t Breathe for a Few Seconds 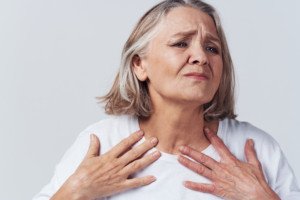 Do you have spells of “I can’t breathe!” that last maybe five or seven seconds?

Instead of allowing this to scare the pants off of you, see a doctor to get to the bottom of this frightening symptom.

My mother was having sporadic incidents in which she’d report, “I can’t breathe.”

Of course, she was able to breathe but said it was difficult. She was not panting, winded or out of breath as one might be after running up a few flights of stairs.

The trouble breathing would last, as my mother said, “seconds,” and had no apparent trigger, frequently occurring when she was seated, or standing passively. Exertion did not bring it on.

If all your tests “come back normal,” it’s likely that the reason you have very brief episodes of difficulty breathing is anxiety related or a panic attack, even though right before the brief episode of breathing trouble, you weren’t thinking of anything worrisome.

Breathing Problems from a Panic Attack

“Panic attacks can cause a change in one’s ability to breathe,” says Walter Gaman, MD, FABFM, board certified in family medicine and the author of several award-winning books including “Age to Perfection: How to Thrive to 100, Happy, Healthy, and Wise.”

“Holding breath or gulping for air can be a sign of other conditions, but when all other medical tests are within normal limits, a panic attack should be considered,” continues Dr. Gaman.

“Stress and anxiety are real and panic is caused by an over-stimulation of the fight or flight response within the body.”

My mother has congestive heart failure and an ejection fraction of 25 percent, but her cardiac nurse was more interested in the idea that fluid buildup (from the CHF) was causing the episodes of I can’t breathe.

“An older patient who has a known heart failure may experience an inability to breathe,” says Dr. Gaman.

“If the chest X-ray is normal, showing no fluid or enlargement of the heart, the shortness of breath could be caused by an SVT, supraventricular tachycardia.

“This is when the heart speeds up due to a problem with the electrical signals within the heart.”

There was no weight gain and no edema.

Her other cardiac tests were normal: EKG, echocardiogram (though it did show weak left ventricle—the reason for the 25 EF), blood pressure, pulse, pulse-ox, chemical stress test.

Several years ago she had coronary bypass surgery.

If episodes of SVT had been occurring only while she was at home, making her suddenly “unable to breathe” for a few seconds, these transient events would not have been picked up at the ER.

She saw a pulmonologist who ruled out COPD. The pulmonologist did not believe that the very brief episodes of difficulty breathing were caused by a lung disease or even a heart problem.

When lung disease does cause problems breathing, the episode would not just suddenly come and go and last so briefly without any exertion or pattern; it would be more of a persisting situation.

Furthermore, my mother has no other symptoms that the doctor asked about, such as dizziness, fever, lightheadedness, tingling, numbness, nausea, visual problems or rashes.

The only symptom is the periodic sensation of “I can’t breathe.”

The pulmonologist said it’s probably either anxiety related or a vocal cord dysfunction.

And remember, a panic attack can occur in the absence of precipitating worrisome thoughts.

If you’re having episodes where you have trouble breathing, and it’s not related to exertion and seems to come on for no reason at all, and are brief (lasting only seconds), get your heart and lungs checked, but it’s probably panic attacks.

Get the more serious causes of trouble breathing ruled out first.

Dr. Gaman is with Healthcare Associates of Texas and is with the Staying Young Radio Show 2.0 podcast.