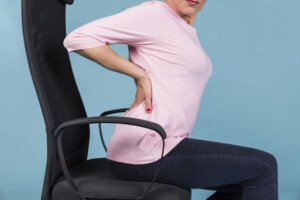 If you think your low backache might be from microscopic colitis, I will describe what this feels like.

Not all “low backache” is the same, and that applies to microscopic colitis, which I was diagnosed with (colonoscopy) in May of 2010.

I have a very mild form; only two flare-ups at the time of this writing, the first flare-up taking about two months to run its course.

I’ll get to the point fast:  The low backache associated with microscopic colitis feels IDENTICAL to the low backache of premenstrual syndrome (PMS).

It’s somewhat stiff, making me want to try to induce cracking (like a chiropractor would), but the overwhelming feature is an uncomfortable aching—and this aching, too, makes me want to get a good crack in.

If you’re a man, hold tight, as I will go into more detail.

The best way to describe the low backache of microscopic colitis is a nagging or persistent feeling in your low back that makes you want to repeatedly twist left and right forcefully to generate some vertebral cracking.

The feeling is an ache, for sure, but at the same time, it makes me want to stretch and crack the bones.

The low backache of microscopic colitis (or PMS) always makes me imagine that I’m at a chiropractor’s office and getting an adjustment; all the bones are getting cracked.

As an athlete, I’ve had low back strain more than once. A microscopic colitis flare-up (or PMS) feels NOTHING like a strained or pulled muscle that you might get from exercise or bending over while picking up something heavy.

In the body are a group of chemicals called prostaglandins. Research implicates them as being part of the cause of PMS.

Compelling evidence of this is that drugs that inhibit prostaglandin production work marvelously at squashing the joint aches of PMS.

This would explain why the low backache of PMS (at least for me) feels absolutely identical to that from microscopic colitis.

It’s the type of discomfort that would not prevent you from doing heavy lifting, if you’re trained, anyways.

It’s not the type of discomfort that would make you nervous about the prospect of moving furniture or shoveling snow.

But it’s really annoying and can be aggravating, because it makes me want to keep twisting to induce bone cracking and soft-tissue popping — which, when it happens, feels SO GOOD.