Can Newly Postmenopausal Women Have a Period? 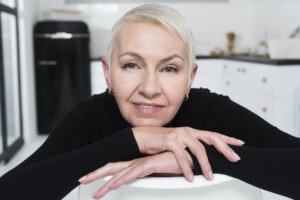 An OBGYN nurse says it really IS possible for a postmenopausal woman to have a period.

Many women want to know if a woman postmenopause can suddenly have a period, and this question almost always pertains to women who completed menopause fairly recently.

Here is what my gynecological nurse stated, when I began experiencing symptoms that felt identical to those that used to precede my period during my fertile days:

“It’s certainly possible it’s related to hormone fluctuation. Menopause is not a linear thing. I can count on one hand the number of patients who’ve had that [a period after menopause], producing enough of a hormone to have a cycle here and there.”

At the time I was speaking with her, I had not had any spotting, let alone flowing.

So I asked: “Could this be a phantom period from a resurgence of hormones since the 12-month rule for menopause isn’t cut in stone?”

She replied, “I have had [in her patients] documented high FSH level and had period, and FSH level came down to 30.

“For some reason their ovaries kicked in and started ovulating again. It’s not common but it happens. Ovaries kick in. I’ve seen it.”

So there you have it. The medical literature states that it’s NOT possible to have a period after menopause, but my gynecological nurse has witnessed it, albeit a handful of times.

All I’m doing here is accurately reporting what my nurse said. I’m not making any claim beyond that.

Now keep in mind that this article deals strictly with periods—menstruation—postmenopause, NOT vaginal bleeding, which can indicate numerous pathologies. Bleeding postmenopause almost never means a period.

However, if it’s actual menstruation, this can be verified with a combination of tests that would include an endometrial biopsy.

“You are correct there are varying kind of ranges for FSH level. It’s a little tricky; it’s not a be-all end-all.

It’s kind of used as a guide. If I have someone who’s in their 30s and 40s, they can be in the menopausal range, but I wouldn’t be comfortable telling them to stop birth control [if they didn’t want to get pregnant].

“It’s [FSH] one of those things I don’t use as a be-all end-all. It’s a guide. I have seen patients who are very high [FSH], and for whatever reason they start menstruating again. Their ovaries have kicked back in.”

This can include a phantom period. Here is what Machelle Seibel, MD, says on the medhelp.org site, in response to a newly postmenopausal patient wondering why she’s feeling crampy but getting no period:

“Uterine cramping and bloating might be an indication of fluctuating hormone levels that are not high enough to cause a period but still present in active amounts.”